The embroidery industry was a closed shop until Bill Wilson developed the first industry-specific software. Images talks to the founder of Wilcom about revolutionising an industry

Thirty-five years ago, any outsiders wanting to get into the embroidery industry had the odds stacked against them. “At that time digitising, or punching as it was called then, was a black art and wasn’t written down,” explains Bill Wilson, co-founder of Wilcom. “It was a trade secret and you learnt it from your father or your grandfather.”

In the 1970s Bill was doing his master’s degree in mechanical engineering in Canada, looking at how to control machines with software. He was offered a number of projects, but the one that grabbed him was an embroidery machine project. “I thought: ‘That’s kind of novel.’ It was a mixture of electronic design, mechanical design and software. My friends used to tease me: “Oh, Bill, you’re doing a master’s in embroidery. You’ll make someone a good wife some day.’”

At the same time in Australia, Robert Pongrass and his family had bought an embroidery company. “They wanted to modernise it so they went looking to buy computer-controlled equipment,” explains Bill. “But they couldn’t find any, because it didn’t exist.”

Robert asked around and mutual friends mentioned the Canadian professor who was working on computers and embroidery. Next time Robert was in Canada he went and spoke to the professor, who directed him to Bill, who says: “He was quite enthused by what we were doing. Robert’s really visionary and entrepreneurial, so he got really excited and went back to Australia to find a way to fund something.” Funds in place, he invited Bill to Australia for a year to try and make something commercial out of his master’s work.

The first project they worked on was automatic lettering at the company owned by the Pongrass family, RK Badge Embroidery Company, in Sydney. “It used to take forever to make a new design,” comments Bill. “They used to have to make six enlargement drawings of the design and draft in every stitch and then they put that on a mechanical machine and point out each stitch. Move the pointer and press the button. Move the pointer, press the button. They would do that stitch by stitch for this type of design. It would take hours, days…

“Robert and I looked at digitising from an engineering point of view: we were conceptual. We were the first to use computer graphics to do embroidery design. Looking back, it was an interesting combination of Robert’s vision and my technical approach.”

They named the company Wilcom – Poncom didn’t have the same ring, laughs Bill – and showed the first digitising system to the public in September 1980. It took another nine months before they sold their first system including hardware to the Lion Brothers in America (“the largest embroidery company in America at the time”) for $120,000, then another system to Hiraoka in Japan before selling a system to Geoffrey Macpherson in the UK for £50,000 – the computer it ran on cost about the same, making it a hefty investment that few could afford at that time. A good, mid-range PC plus Wilcom software now costs around £5,000, confirms Bill.

Bill Wilson, the embroidered ship in the photo, the James Craig, pre-dated curve fills. It was digitised in 1992 by Bill, an enthusiastic sailor, and stitched four at a time by his wife, Marilyn, on a Tajima four-head

The year in Australia stretched to another year, and another. A few more systems were sold, then in late 1983 they had a real breakthrough when a PDP-11 desktop digital mini-computer came out called the Pro 350, followed by the Pro 380. “You could buy a computer with software starting from $35,000 instead of $120,000. That’s when sales really took off, late 1983, early 1984.“Initially people were sceptical. ‘You did what? How could that work?’ There was a lot of educating to be done. And then finally: ‘Oh my gosh, it does work. These big companies are using it. It’s still very expensive, but you can make garments so much more quickly and the quality of designs is so much better.’”At that time most companies had been using punching centres for their digitising. Bill continues: “One client used to get his punch tapes made from Gunold in Germany and he nervously ordered a system that cost $55,000. He said ‘I’m putting in a lot of money. I just need to know, is it going to make me as good a quality as I get from Gunold?’ And I said, ‘Yes, don’t worry.’ And then a couple of months after he installed it I talked to him and he said, ‘Ah, Bill. This doesn’t make quality like Gunold… It makes it better.’Companies started to make their own designs rather than buy them from a digitising centre; interestingly, however, companies are now using the digitising centres again. “With the advent of the internet and everyone wanting their own custom designs, the backlog of designs has become big again,” Bill explains. “But people still want to make designs themselves. They think: ‘I’ll do the simple and straightforward ones myself so I have immediate control and do it on a quicker turnaround, and I’ll outsource the complicated ones.’”

The next big invention was Stitch Processing, for which Wilcom secured a ‘hotly contested’ patent in 1985. “We figured out a method of how to be able to read the stitches of an existing design and figure out what the designer’s intentions were, what the shapes were and the stitch types, and then recreate it. So you could re-size the design and maintain the original density. We invented a technique to do that and called it the Stitch Processor, which was a play on Word Processor, which were all the rage at the time.“Then we implemented a new system, which we call our all-in-one EMB file, where you can save the shapes, the stitches, object properties, colours, artwork – everything – on one file. The EMB was a watershed moment.”

Wilcom then created TrueSizer, a free program that allows those who don’t have the Wilcom software to still be able to scale and convert the stitch files. “That sort of made [EMB] a factory standard,” explains Bill. “A bit like Microsoft .doc files. It’s not quite as predominant as that one, but it comes close.”

One of the biggest focuses for the company, however, has been getting the stitch quality right. As Bill explains, “You can have a really expensive, really good quality embroidery machine and if you give it a poor design it’s going to make the machine look bad.”

The difference these innovations have made to the industry as a whole is huge. As the software began to take hold, existing businesses grew, says Bill, adding: “I’ve had quite a few people tell me because they were using old equipment, the younger generation wasn’t so interested in the family business. But when computers came along they got interested again.” The big gamechanger, however, was the opening up of the industry. “We made it possible for new people to come into the industry much more easily. There’s still a fair bit to learn, but it’s learnable now.”

Another change brought about by the software is that many more designs are now being made. “You can even get a custom design done for a quantity of one in some places now,” says Bill. “It just made embroidery a lot more accessible to people.”

As for the future, even though Robert, who is eight years older than Bill, has retired, Bill is not showing any signs of wanting to stop innovating. Ask him what’s left to do and he reels out a list: “Doing things more automated to take less time, coming up with creative stitching effects that are easy to use and more realistic. Colours. Shading. Working more effectively. We get good feedback from customers along with suggestions, but big breakthroughs come when people describe their problems and have no idea how to solve them. One of my favourites quotes is from Henry Ford: ‘If I had listened to the people and did what they wanted me to do, I would have invented a faster horse.

“I’ve been doing this for 36 years and I’m still enthusiastic about it. It’s just so encouraging to see how enthusiastic customers are because you’ve helped them in their business. I get a buzz out of that.”

In the late 1990s, Wilcom ran an ad campaign with the tagline: Wilcom – Software That Makes You Money. Bill explains: “You save time by not only creating designs quickly, but because of the high quality they run smoothly in production, and look great with the automated creative stitch effects.”

This selection of images show TrueView embroidery simulations of some of the bank note designs created for the Wilcom – Software That Makes You Money ad campaign in the 1990s. The images were created by the Wilcom Embroidery Studio software with the Virtual Decoration element. The notes feature curved line embroidery fills, a new feature at the time of the campaign, for which Wilcom was awarded a patent 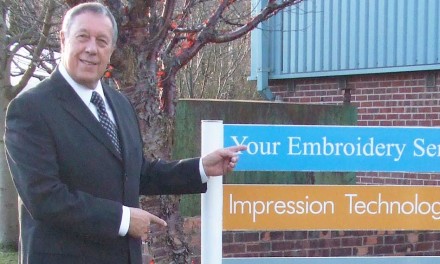 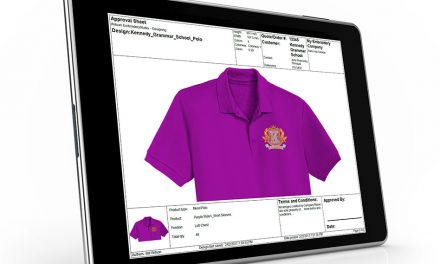 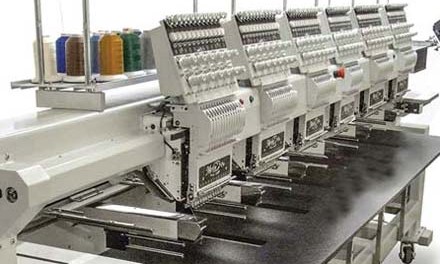 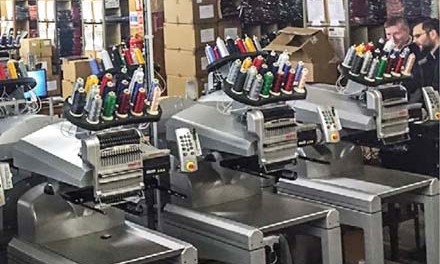