The number of the beast 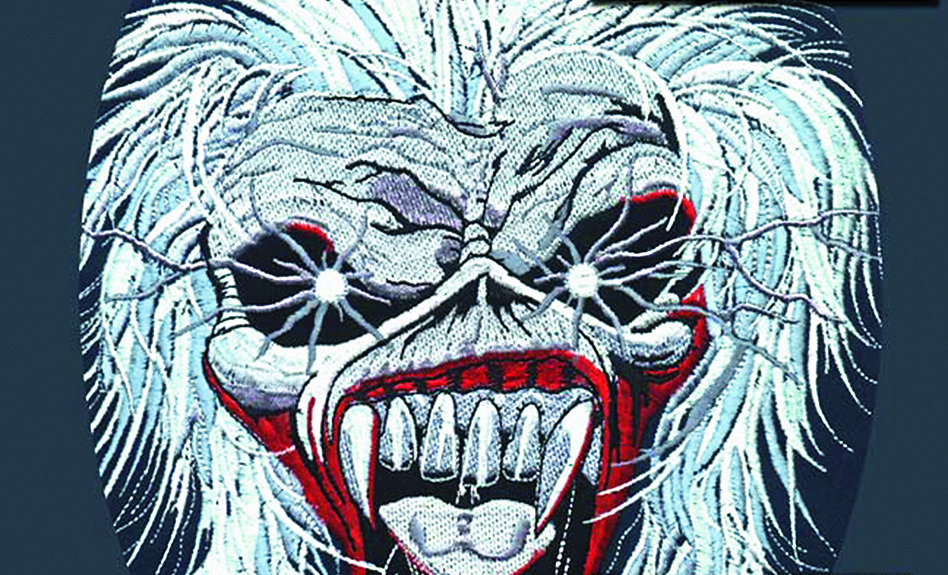 Hell on Earth, The Longest Day, Run to the Hills – so many Iron Maiden song titles could be applied to the laborious task of digitising in the days before software was developed to take the pain away

Lhea Barrett of Creative Needle takes us on a journey back in time and explains how he manually digitised Eddie The Head, the band’s mascot, for embroidered tour jackets in the early 1990s.

The first stage was to draw the head by hand at six times the actual size.

The finished embroidery on the way back of the jackets measured 24cm wide so the initial drawing was 144cm wide. A big roll of paper always came in handy in those days.

The drawing needed to show every strand of hair, and I had to work out what strands laid over the top and which ones lay underneath in order to make it look realistic.

A gauge wheel was then rolled over the areas that needed stitching, making tiny little pinpricks that would be the spacing for each stitch to be drawn. Every single satin stitch had to be drawn to show how the stitches twisted and turned to give the appearance of realistic hair. 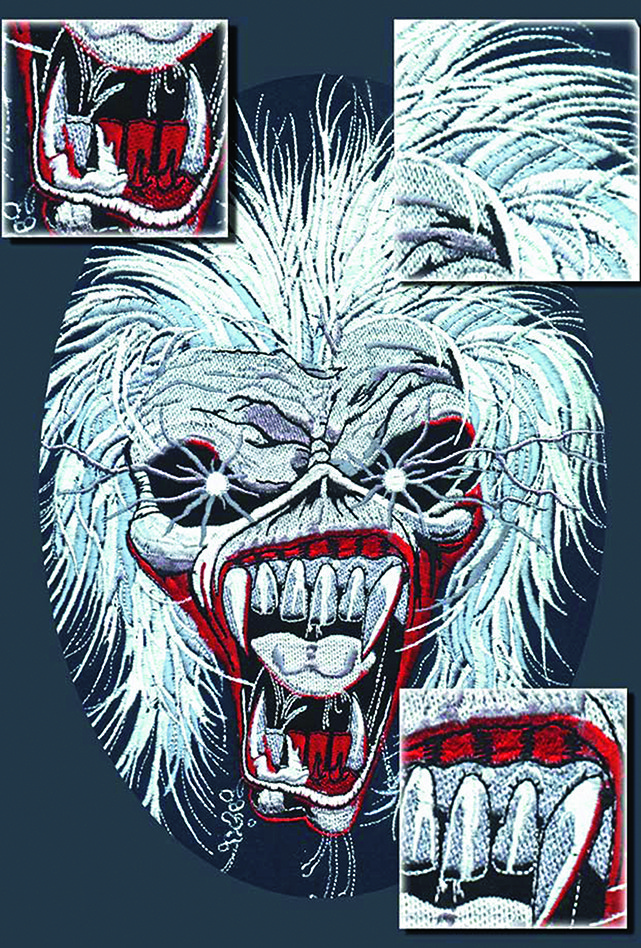 Colours had to be indicated on the drawing as well, so we kept a nice set of colouring pencils. The actual drawing was always done in pen so it didn’t smudge and rub away when being digitised.

Digitising was a feat in itself. All the underlay stitches had to be added by hand, there was no automatic underlay here. Then every stitch had to be plotted on a huge upright board that was approximately nine feet wide by five feet high – there was none of this “plot four points and tell it to infill” like nowadays. Even the infill stitch needed points plotting to get the angle and stitch density correct.

The most remarkable thing I remembered when looking back at how I did this embroidery is that when it was being digitised, it was done blind.In other words, there was no computer screen to see how the design was unfolding. Only after it was finished and sewn out could you see if anything had been missed or looked terrible. There were very limited possibilities for editing so it was vital to get it right the first time.

To draw and digitise this design took around two weeks. Back in the early ‘90s fewer than 20-30 people in the UK could do this. There was no internet either, everything was saved and sent on floppy disks; before that it was saved on a paper tape that had lots of tiny holes punched in it which, when fed into an embroidery machine, gave instructions to the machine. This is where the term ‘punching’ comes from. The cost for digitising back then was £9 per 1,000 stitches so this job ended up costing over £1,000 but, as you can see, a great deal of skill (and time) was needed.

Not many old school digitisers exist nowadays. Those who do, such as myself, know how to use modern software to produce old school techniques and do a far better and more professional job because we understand what embroidery machines and different fabrics require. There’s no substitute for a wealth of experience.