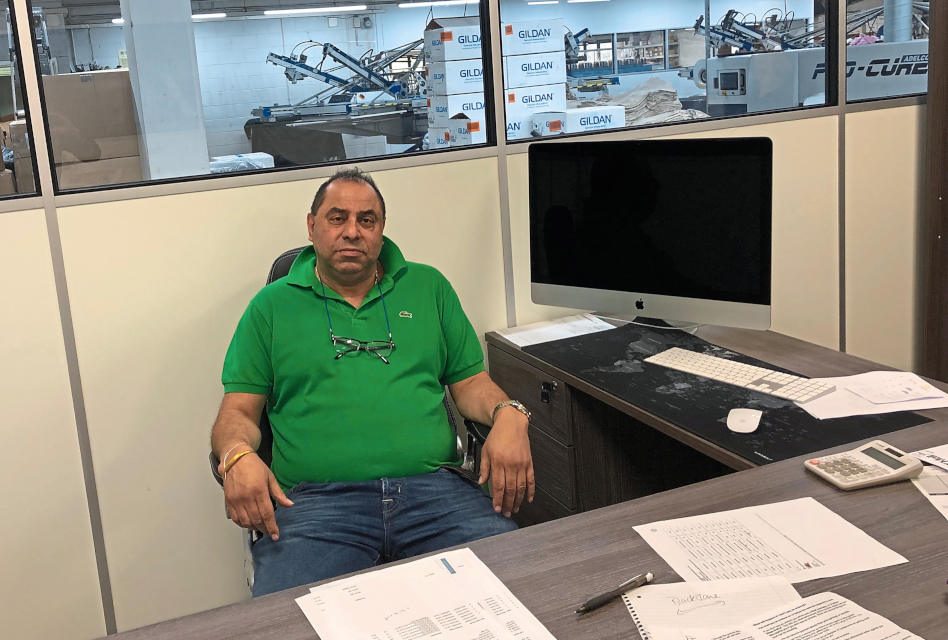 Mark Ludmon visits well-known industry figure Pally Hayre, founder and owner of Pally International, to discover what it takes to stay at the top of the garment printing game for more than three decades

Pally Hayre sits at a large desk in the middle of the print shop floor at Pally International, specialists in supplying fashion clothing for high-street and online retailers. From there he watches over his well-drilled staff like a general surveying his troops. After 33 years in the garment trade, this is how he has always run his business. “I know exactly what’s happening from here,” he explains. “I like to be where people can ask me questions and I can see what everyone is doing. I don’t want to sit in an office. I’m a hands-on person. If someone has to go to the washroom, I’ll get onto the machine. I have to know how to work everything.”

The factory is a buzzing hive of activity, spread across two floors of a 47,000 sq ft building – now called the Hayre Building – on a one-acre site on the north-east edge of Leicester city centre. Pally has installed himself in the main production area located on the first floor, surrounded by screen printing presses, dryers and hundreds of boxes of garments ready to be decorated or despatched. Now employing around 100 people, Pally International has been based here since 2002, but the company dates back much further.

MHM presses from the beginning

Born and bred in Leicester, Pally started out in 1986, setting up Rainbow Screen Printers with three business partners, mainly decorating children’s clothing. They started with nothing but, within six months, they had done well enough for Pally to buy himself a Porsche. After a difference of opinion over future investment strategy, the partners went their separate ways, leaving Pally with the choice of whether to become an employee for someone else or set up a new venture. His entrepreneurial spirit led him to do the latter and, in 1988, he purchased two MHM automatic screen printing machines from John Potter at MHM Direct (GB) and launched Pally Screen Printing, which later evolved into Pally International. “I started off slowly,” he recalls. “I had to sell my car and just worked hard, slowly, slowly building it up.” He has bought 30 MHM carousel presses over the years from John, and currently has eight in use – “all virtually new” – ranging from eight- to 18-colours and including the top-of- the-range Synchroprint 5000, plus the MHM Spyder II direct-to-screen system. Pally has also used Adelco dryers from the start, and now has four of the company’s latest Pro-Cure models, each one serving two presses.

“They keep the heat at a constant temperature very accurately and the extraction at the front and back means there’s no mist,” Pally explains. He is also pleased with his two new compressors, which are almost silent even when working at full throttle, from Leicester-based Cooper Freer. Elsewhere in the building, other kit includes Reliant heat presses, four Monti Antonio sublimation machines and a D.gen Papyrus G5 direct-to- paper printer in its own temperature- controlled room. Along one long wall of the main print shop, something like 10,000 screens are lined up, creating a vast library of past work.

With this set-up, Pally International currently produces around 100,000 pieces per week, supplying manufacturers direct with fashion clothing, especially T-shirts, for retailers including Topshop, Topman, River Island, Urban Outfitters and Boohoo. It means that Pally is witness to the latest high-street fashion trends: the factory shimmers with diamanté, foils, glitter, sequins and colourful transfers. Long sleeves are very much in vogue right now, and there is increased demand for three or four different prints on one garment. “These are time-consuming and keep the machines busy,” Pally adds. 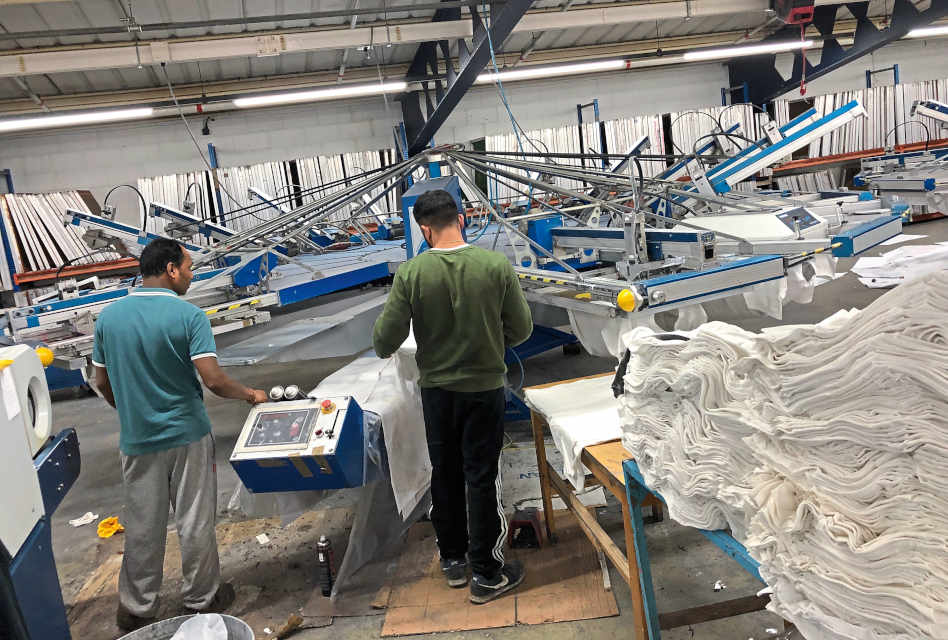 There are eight MHM printing presses at Pally International, including a top-of-the-range Synchroprint 5000

The company is constantly investing in new technology, such as a new neck-label machine, in response to customer demand. Pally’s ambition is to do everything in-house and he is planning to introduce dyeing facilities at the factory later this year instead of outsourcing it as he does now. The business remains committed to screen printing, which meets its production needs; however, it also has access to digital printing thanks to garment manufacturer and designer The Tshirt Factory Europe – headed by Adam Steventon and Nick Higgins – which was set up with Pally’s help and rents part of the building downstairs. “We have the digital machine if we want to do something quickly to show a customer,” Pally says. Pally has also invested in constructing a separate new office and manufacturing spaces throughout the factory floor, including meeting and sampling rooms, as well as new facilities for staff.

The company is involved in Leicester’s Fast Forward initiative to build legal and ethical labour standards compliance among suppliers in the garment industry. This scheme was originally instigated because of concerns about working practices among garment suppliers in the East Midlands. It aims to drive transparency and help prevent exploitation, tackle areas such as fair wages, employment contracts and employee mistreatment, and ensure a safe working environment. At Pally International, some of the 100-strong workforce has been there for 20 years. “I treat everybody the same,” Pally says. “We give them all the things that they need and everybody knows what they are doing. Everyone gets a proper wage. Some other companies pay less but we pay a fair wage.” Pally is on site at 6am every day, personally opening up the factory so it is ready to go at 8am and shutting up after work stops at 5pm. “I put in the hours. I keep it running smoothly,” he adds.

One of the latest investments was to bring embroidery in-house, with the company acquiring two 12-head Happy Japan embroidery machines over the past 12 months. Pally’s 30-year-old son Garron has led this project and also looks after design and the preparation of samples. “After buying the first machine a year ago and the second a few months ago, we can do it quicker now,” Pally points out. Garron is also an entrepreneur with his own fashion clothing brand, Loud, based in the centre of Leicester, which sells to consumers via loudshop.com. 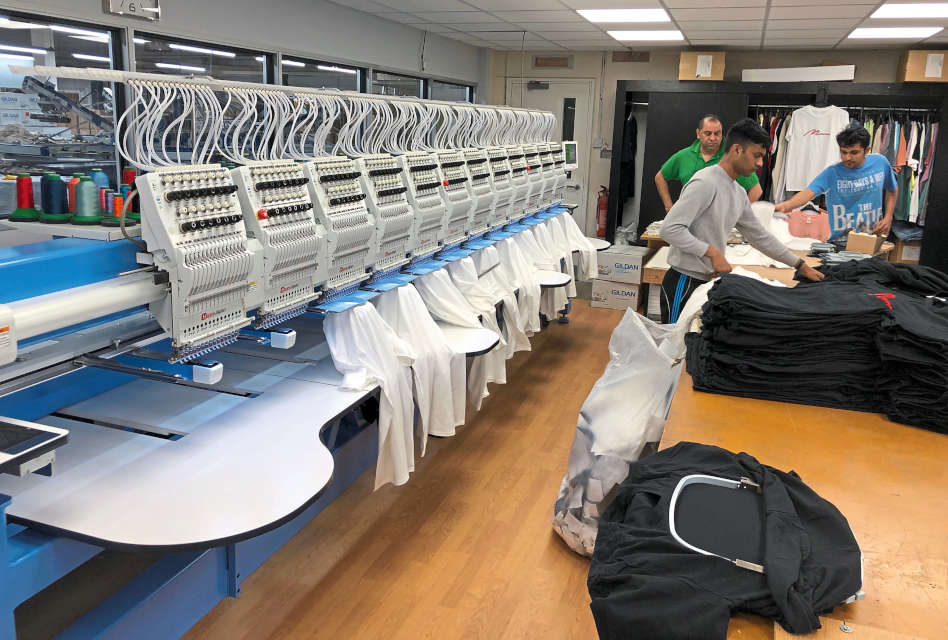 He is not the only member of the family involved in Pally International: Pally’s wife Ruby works in the business and his brother Solly has been there since the start. Even their print shop pooch, Caesar, a seven-year-old Bordeaux mastiff (like the canine co-star of the film Turner and Hooch), has a special place in the business, immortalised as an oil painting on canvas that greets everyone entering the building.

The key to success

The flat management structure is part of the company’s success, Pally points out. “We’re a big company but we don’t have sales reps, we don’t have any agents, we don’t have any managers. I don’t have an accountant or bookkeeper in-house. All the graphic designs come from the high-street shops so we have no graphic designers in-house apart from a part-timer who comes in as needed. That’s how we keep overheads down.” Pally also points to buying in bulk – from ink to T-shirts – along with the prompt payment of suppliers as another way that the business keeps costs competitive.

“I get good rates because I pay suppliers straightaway. All my suppliers get paid within seven days, I make sure of it personally. If you have got the money, why not pay it?” Unusually in today’s market, Pally International decided to give up its business website, has no time for social media, and directs all incoming emails through a single email address. “We don’t need the headache of a website,” Pally explains. “We have 10 customers and we keep them happy. We would rather spend time looking after them. We can rely on word of mouth. It’s the service we give, and that’s how we keep everyone here busy.” 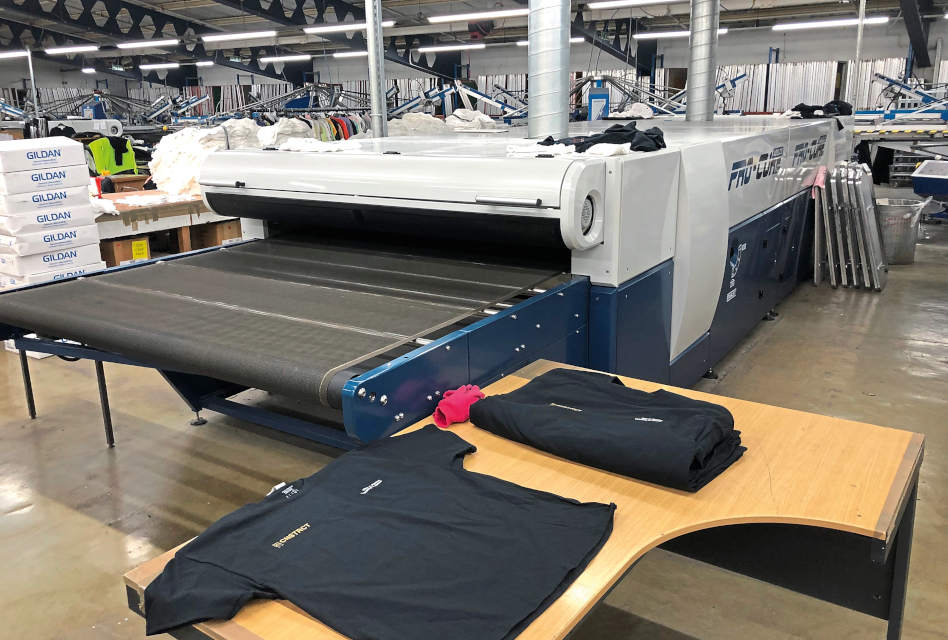 Each of the four Adelco Pro-Cure dryers serves two presses

Having a small number of regular customers makes it easier for Pally International to turn orders around “very quickly” – essential in the ever-moving high-street fashion market. “Customers want their finished garment in their shop within a week,” Pally says. “We can print it, dye it, pack it, do it all in five working days.” This is particularly appealing for retailers with an online channel that will flag up immediately whether a new design is proving particularly popular. “The retailer will want to re-order straightaway, maybe order it for their stores. We can do that.”

After 33 years, Pally appears as driven to make a success of his business as he was on the day he started out. As well as being the first to arrive at the factory every morning, he rarely takes holidays – each year he goes away only for two weeks at Christmas and on bank holiday weekends. Ultimately, the motivation to keep going and keep growing is what allows him to make the most of his leisure time: he continues to be a fan of top-end cars, from Porsches to Aston Martins, and holidays in exotic destinations such as Saint Lucia, Bermuda, Jamaica and Goa. “What is the point of working if you are not making lots of money?” he asks. “Nice watches, a lovely house, the cars. I enjoy doing it because I like nice things.”

Pally is proud that he and his family have built the business up without needing to borrow. “We don’t owe any money. We put the money back into the business.” He is also pleased that, over three decades, there have never been any judgments against his companies for copyright – a constant risk for any garment decorator in the fast-moving fashion industry. The son of a steelworker, he is well-known and widely respected for the part he has played in maintaining the region’s long-established textile industry, earning him the nickname of ‘the King of Leicester’. Seeing him at work at the hub of production on his bustling print shop floor, it’s immediately evident that this is one royal who has no plans to give up his crown any time soon. 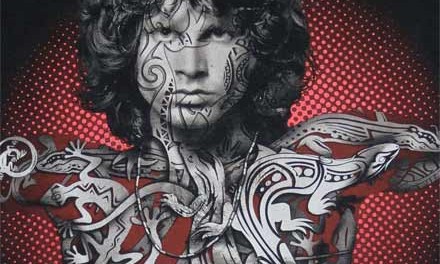 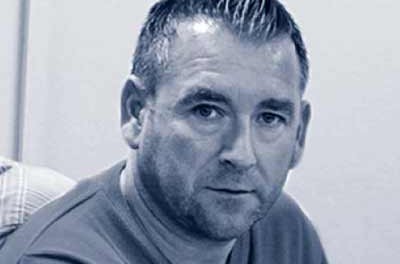 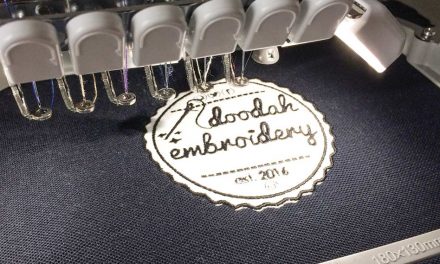