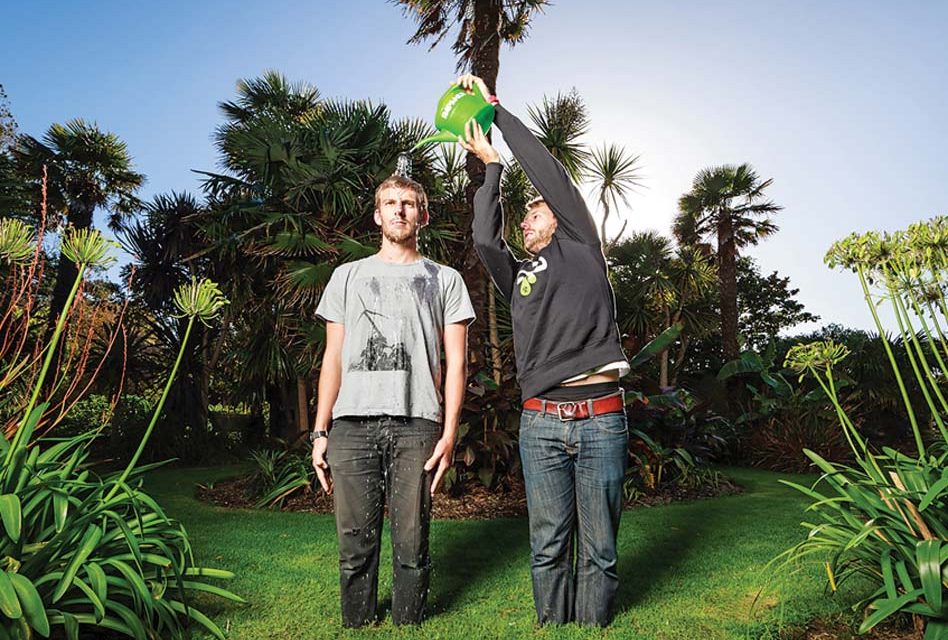 (L-R) Martin and Rob set up Rapanui after leaving uni

The award-winning Rapanui and its print-on-demand arm Teemill are the result of two brothers’ dogged belief in the need for – and viability of – sustainable, ethical clothing

The Isle of Wight-based Rapanui has been a ‘one-to-watch’ in the world of branded merchandise, eco fashion and T-shirt printing for a number of years now. The company’s name is taken from Rapa Nui, the native name for Easter Island, which suffered a population collapse in the 18th century that is often attributed to over-exploitation of the island’s natural resources. Co-founder Rob Drake-Knight, 32, explains: “It is a great metaphor for sustainability, so we thought it was an interesting name.” The company promotes sustainable fashion by manufacturing in an ethically and environmentally responsible way both for its own fashion line and also as a custom clothing supplier for some of the UK’s biggest brands.

Rapanui began in 2009 when two brothers, Rob and Martin, now 30, found themselves fresh out of university “with cheap suits, wispy beards and no money”, laughs Rob. Martin had studied renewable energy engineering while Rob was a business graduate. The Isle of Wight, where they grew up and had returned to after uni, is an area of high unemployment with few opportunities in particular for the young. As well as finding it difficult to be taken seriously in business thanks to their age, the effects of the recession that started in 2008 were harshly apparent, and so they decided to set up a T-shirt business in a garden shed.

Rob says: “Manufacturing T-shirts was accessible and relatively inexpensive in terms of the basic product. We started with £200 each and our first move was going down to the local embroidery shop with a box of T-shirts. We sold them to friends and family, then bought two more boxes with the proceeds, which has been the basic plan ever since.”

As well as designing the T-shirts themselves, the brothers also spent the early days of Rapanui learning how to design and code websites, promoting the brand using PR, link building, and building a supply chain. “Quite a lot of hustling,” is how Rob sums it up. “But having no money was a massive advantage. Our business is lean, resourceful and simple as a result – it’s essential to run a company like that in order to make sustainability affordable.” Since their first month in business, they have used organic, sustainable or recycled fabrics, from bamboo to British wool, and continue to do so now. 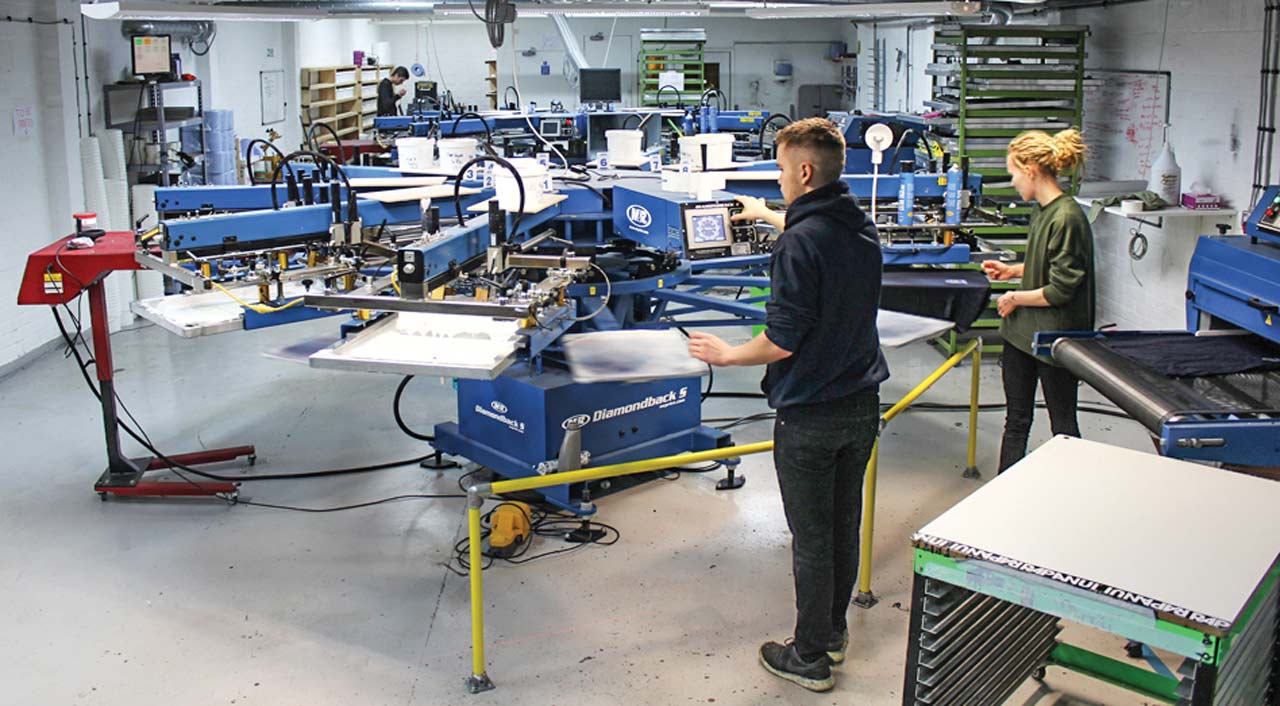 Initially solely a fashion brand, they soon started another strand of the business aimed at the B2B market where they sold promotional merchandise and wholesale T-shirts that were embellished using local printers and embroiderers.

Having started in a shed, they soon upgraded to a converted garage and then a shop with a small T-shirt printing production unit out the back, before moving to their first dedicated factory in Cowes. By this time they’d started manufacturing their own organic cotton T-shirt blanks because they wanted a wider range of styles for the Rapanui fashion brand, as well as control over the colours and styles.

Deciding to manufacture a clothing line, especially overseas – the Rapanui garments are made in India – would faze many more experienced people, but the brothers just got on with it. “Our philosophy has always been to Google it. It doesn’t take too long to find out what to do,” says Rob. “We spent a lot of time researching, developing relationships and finding the right people. It takes a lot of work and there was a lot to learn, but it’s all just a series of logical, practical steps, and we just put the hours in. We were fortunate in that having had the brand, we’d already spent a lot of time solving problems and seen some results so we had the confidence to know we would get over new, bigger hurdles as they came up.”

After starting to produce their own wholesale T-shirts, Rob and Martin decided to start printing T-shirts in the UK. “We had an integrated supply chain at one end and we had an integrated warehouse and fulfilment system at the other end – it was just the embellishment bit in the middle that was non-existent. It made sense to join the dots up.”

They kicked off with a manual screen printer from Dave Roper and some Melco embroidery machines from Amaya. The embroidery machines are still in use, but the manual printer has been replaced by two eight-head M&R automatics. These carousels are the best capital investment the company has made so far, reports Rob. “I remember one of the lads manually screen printing a big job and I thought, ‘This is completely bonkers.’ It was quite a lot of money to go from manual to automatic, but looking back it was a great move. For us it meant that we could screen print T-shirts faster, which meant we had more time, which meant we could get more customers.” 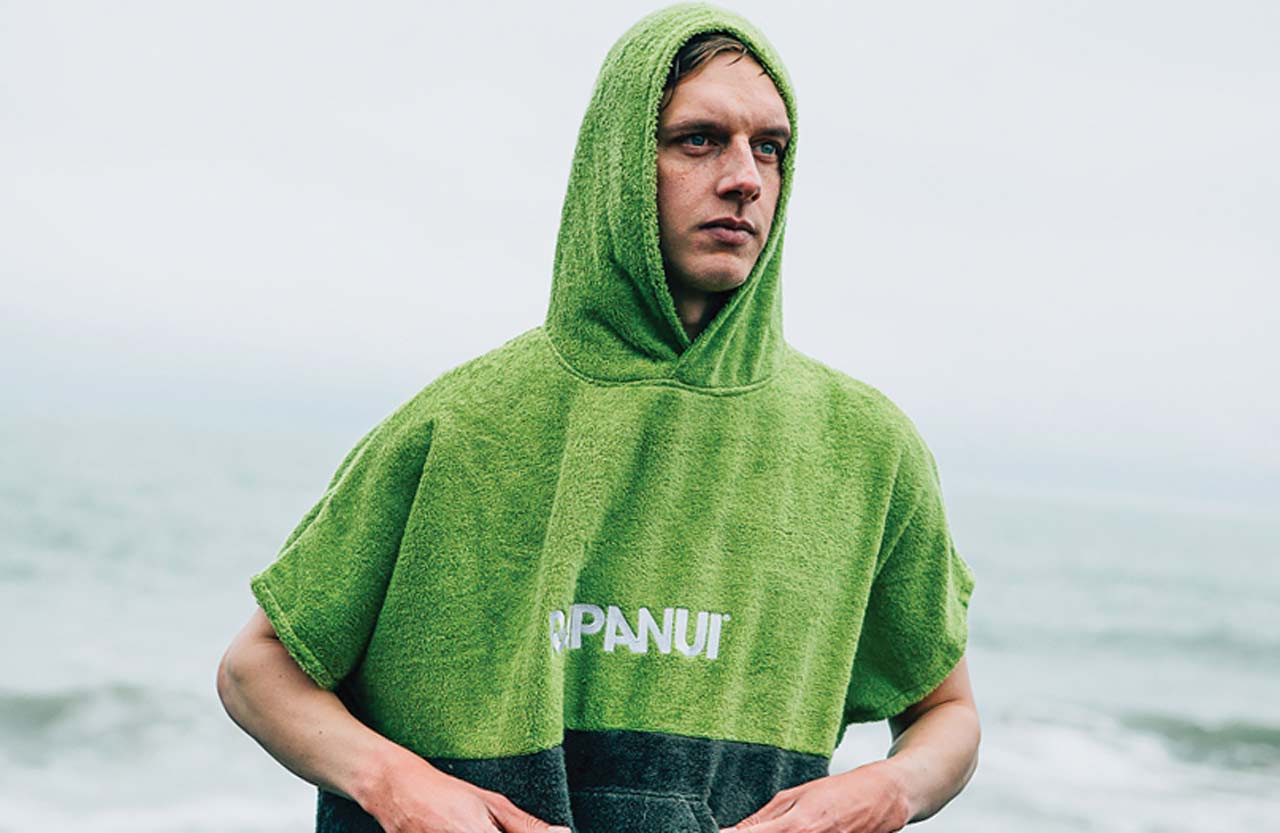 The company’s own ‘Rapanui’ fashion brand

They’re now in a converted supermarket in Freshwater that they purchased in September last year. “It’s good for screen printing T-shirts because it’s clean, light and well ventilated,” points out Rob. They have installed solar panels on the roof, and use a renewable energy supplier to top up on high demand days. LED lights are used throughout to ensure the energy usage is as low as it can be, the dryers are electric so they can be partly powered by the solar panels, and there is a huge amount of insulation. “The factory is pretty much heated by the dryers in the winter.”

Rob advises other print shops looking to become more sustainable in their approach to be pragmatic. “Quite often, sustainability is actually just applied common sense. Choosing to install solar or invest in making your building more efficient actually save you money,” he comments. “Sustainability and the economy don’t have to be opposing forces.”

Designing more sustainable products and systems is part of the company’s DNA although Rob is quick to point out that rather than aiming to promote how ‘good’ their business is, their ethos is focused instead on transparency: “It’s not that people don’t care about this stuff, it’s just hard to know what to do about it. We help our customers find out where and how our products are made so that they can make an informed choice. Customers are smart, they will make their own decisions about what they buy, and normally it’s the right choice, when they’re given the right information.”

While numerous high profile charities use Rapanui and its print-on-demand arm, Teemill, the brothers don’t only look for clients whose values chime with their own. “If we’re selling branded merchandise that is made from organic cotton and uses eco-friendly printing methods to all sorts of companies, then I think that’s a good thing no matter who it is. At a practical level, it means it displaces other products that are less ‘good’. And that’s the point of the company. Yes, we’ve had a lot of pick-up from charities, but we also print a lot of branded merchandise for big UK brands and multinationals.” 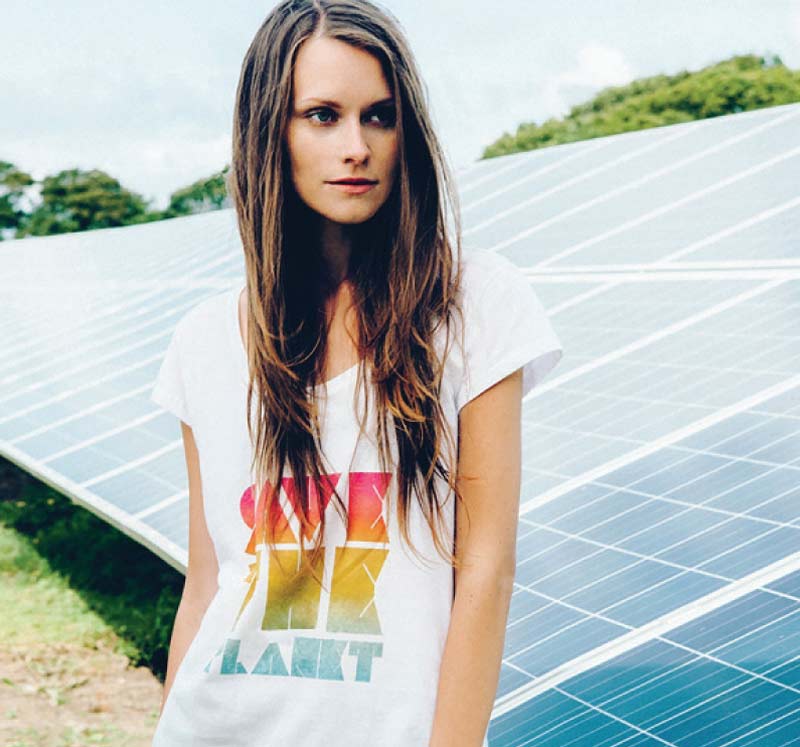 Rapanui has installed solar panels to supply electricity for its factory 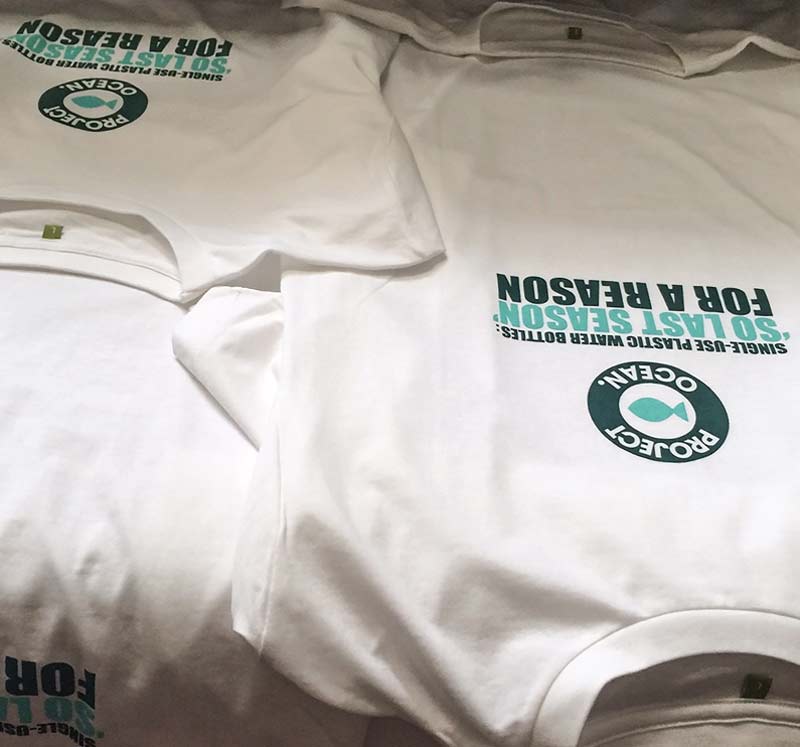 T-shirts for Selfridges for the Project Ocean

There are three strands to the business – the fashion line, trade printing and Teemill – all of which contribute equally to the overall company. The aim is to continue growing all three, a big task that requires quite a few dedicated staff, which Rapanui has and hopes to grow with its extremely successful apprenticeship programme. “The Isle of Wight is certainly up there in terms of lowest GDP per capita, and having an ageing population and a seasonal economy: essentially, it’s quite a tricky place to find a job if you’re a young person. Having been in the position ourselves where we couldn’t find the right kind of jobs and had to come up with our own ones, we recognised there were probably quite a lot of other people on the Isle of Wight who were in the same position. Many of those young people are great and just need a break. As part of that belief, we started training apprentices.

“About 75% of our current workforce came through our apprenticeship scheme. Culturally, it makes a big difference. There’s a great feeling of energy and progress – they see that they’re progressing themselves, and new ideas help the business grow and innovate.”

Its proactive approach to employment along with the ‘everything is possible’ attitude that’s apparent throughout Rapanui’s operation has resulted in an agile company that is constantly developing fresh ideas. It’s a great reminder that it is perfectly feasible to stick doggedly to your beliefs and create both a sustainable and a highly profitable business that is valued by many. 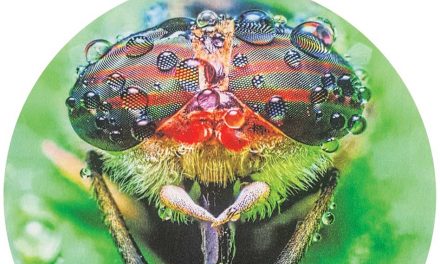 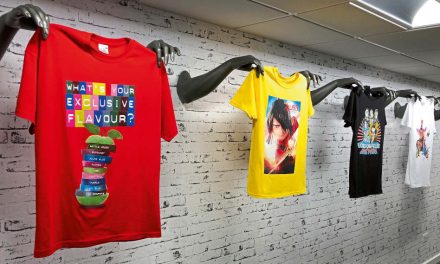 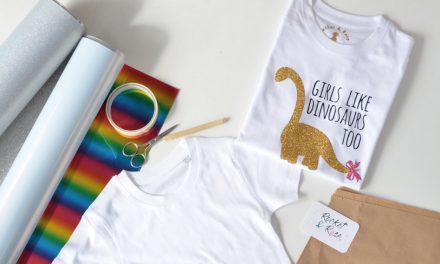 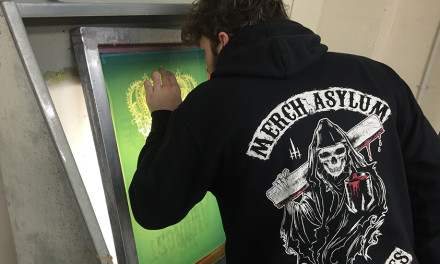