It’s a good year for print, says Dean Sanger, managing director of Sabur Digital. He discusses the benefit of a family-run business and the company’s close partnerships with machine manufacturers 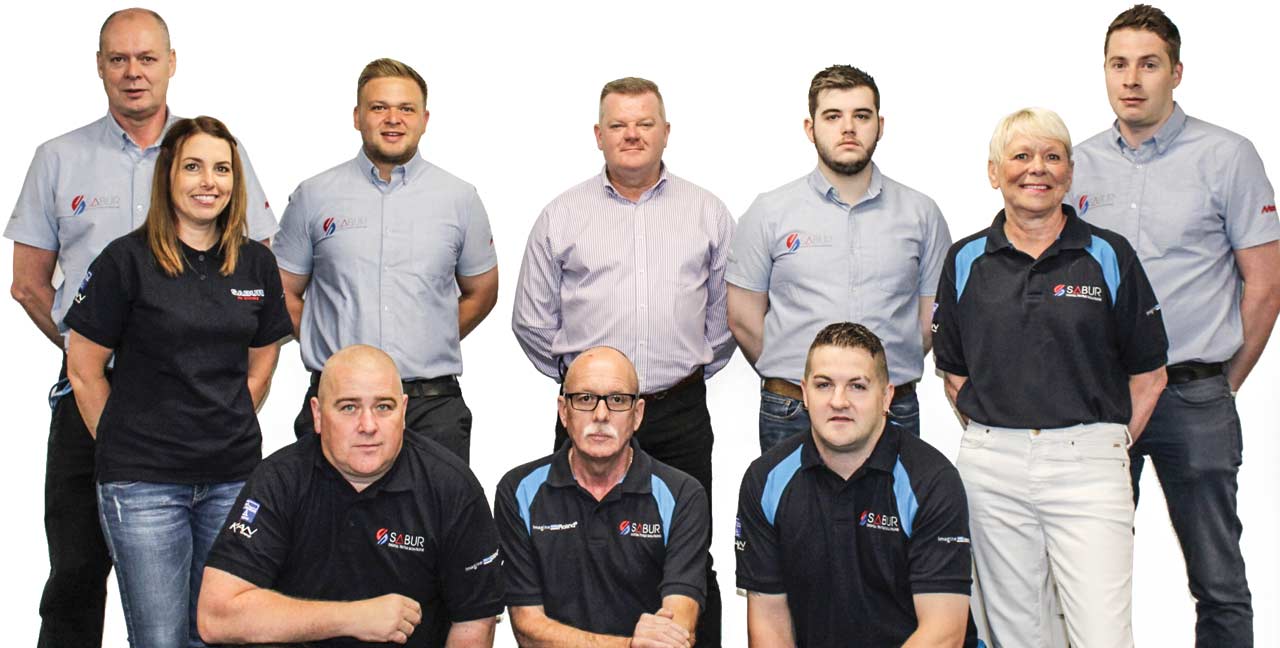 Sublimation printing is a good growth market at the moment, confirms Dean Sanger, managing director of Sabur Digital. He should know: there can’t be many in the industry with more textile printing experience and knowledge than Dean. Having started out from school working in a mill manufacturing fabrics, he’s done warping, weaving, flatbed knitting, circular knitting, helped out in a dye house and worked in management for a manufacturing company. His business partner, Ian Burton, has a similarly impressive resume having amassed a formidable amount of experience working in production management, both in the UK and overseas.

It’s been 19 years since Dean and Ian set up Sabur together. “I’m the S-a, he’s the b-u-r. Sanger and Burton. It was either Sabur or Burger,” laughs Dean.

In the first year they worked “very, very hard, knocking on doors”, he continues. “We offered free ink-mixing and colour-matching services, and within a year, we were the largest supplier of sublimation ink in the UK.” Their turnover at the time was £250,000.

Since starting out in 1998, they have seen business growth year on year, with 2017 already proving to be another year of rapid growth. Both March and April saw a 35% increase on sales within the company when compared with the previous year. “The first part of this year, January, February and into March, was the best for hardware sales ever. Then the last two months it’s been more concentrated on consumables; the print market is getting much busier,” Dean reports.

There is, he explains, a mixture of people buying from them: those new to the industry along with the more established companies replacing older technology with new technology. “Even the machines taken in part exchange have been found new homes and continue to produce. We took three machines in part exchange on one deal recently – within two weeks, they’d all been placed within new companies without a hitch. In most cases we originally supplied the machines which means we know them and know the machines have generally been covered under extended warranties.”

A large proportion of Sabur’s customers produce sportswear garments, with fashion making up another healthy percentage. “Fashion and home furnishing is a strange one, I thought pigment printing would make a large impression on the market but sublimation is still proving popular. I think it’s because polyester [fabric] has improved so much over the years. Going back only four or five years, the sublimation T-shirts were quite heavy, but now they’re very cottonesque. The average person would be hard-pressed to differentiate a polyester garment from a cotton one, or a 75%/25% fabric combination.”

The Sabur Digital show suite at the company’s Barnsley HQ

Soft signage is another area that offers plenty of sales potential for owners of wide format digital printing machinery, according to Dean. “The good thing with soft signage is the high demand along with the relatively high return on investment that’s still achievable.” He recommends that customers opt for a 3.2m wide format digital printer if they’re thinking of adding soft signage to their print services as this opens new markets.

Like many others selling print machinery in the UK, Dean has noticed a gradual return of production from Asia and eastern Europe to the UK over the past year. This, he believes, is in part due to the current weakness of the pound. To emphasise the point, he reveals that another big player, which prints around a quarter of a million linear metres a year, is currently in the process of moving back from Asia to the UK.

Smaller manufacturers are benefitting too, with many expanding quickly. “I have a customer who started sublimation printing two years ago with two Roland machines. He now has two DGI high-speed industrial printers along with multiple Roland machines, all within the short space of two years. He’s very much like ourselves: he’s not frightened to invest in the industry and the strategy is proving successful at the moment. You have to invest or you stagnate. I don’t think it’s just a short-term trend; the industry will continue to grow and adapt in the medium to long term.”

The downside of this rapid growth is that skilled printers are currently in short supply. “I get that every week: ‘Do you know any printers looking for a job?’ It’s the same on the engineering side, any print machine engineer worth their salt is not going to be short of work and job offers.”

He puts the success of Sabur down to the team offering “the highest level service in the industry”, which in turn he puts down to being a family-run business: “We all go the extra mile.” Ian’s son Aaron is involved in sales and shadows what Dean does, while Dean’s son Harvey is involved in the engineering side looking after installs and machine back-up. Ian’s brother is one of the engineers and Dean’s brother is a driver, while another driver is the brother of Joe in marketing. “We’ve introduced another family into the business,” Dean jokes.

The company is known for its ability to deliver more than 95% of its goods off the shelf within 24 hours on Sabur’s fleet of vans. “We like to deliver everything in our own vehicles wherever possible. It arrives safely, and we can track where they are and how long until they get to a customer.” They bought a new van in June, bringing the number up to five, to make sure they could still deliver on time despite the rapid increase in orders.

The first customer Sabur ever had, from way back in June 1998, is still a customer of the company – he bought two large format heat presses from Dean this June. “I can count on one hand the number of digital customers we’ve lost over the years. Everyone within the company has a vast amount of knowledge. I understand fabrics, prints and manufacturing, and Ian’s the same.

Sabur’s fleet of five delivery vans: the company delivers 95% of its goods off the shelf within 24 hours

“It’s the same with our competitors – we’re all very knowledgeable. Both Magnus at R A Smart and Nick of I-Sub have been involved in the industry for a long time and the same can be said for both myself and Ian. We’ve seen digital sublimation grow from infancy to adulthood. Although competitors within the industry, I feel there is mutual respect between the three of us.”

Dean says Sabur is the biggest textile reseller of Roland DG machines in the UK – Roland was the first hardware brand the company started selling – and the company has also recently been appointed as a Mimaki reseller, strengthening its position within the market.

A further development is the increase in co-operation and relations with Korean manufacturers Digital Graphics Inc (DGI), which has led to an increase of DGI printers within Sabur’s portfolio. “I watched and monitored the new DGI Fabrijet printers very closely at Fespa and I have to say that the printers DGI had on their stand ran faultlessly over the entire event. The all new 3.2 metre Fabrijet FT- 3204X Hybrid printer was to me one of the real stars of the show; with its ability to print direct to both fabric and paper with the same ink set, it really is a two-in-one printer.”

The Fabrijet FT-1608 is already installed in Sabur’s show suite, and the new FT- 3204X is being shipped and due to be installed shortly. Sabur’s service engineers have already attended training courses at DGI headquarters in Korea, so they’re now ready and able to install machines and offer support where needed.

Customers can book demonstrations at the show suite in the company’s Barnsley office, although if Dean has his way the address will soon be changing. He’s currently looking to buy a larger unit having outgrown the current one, despite two additional mezzanine floors – there is simply no longer any scope for expansion.

Next year will be 20 years since Dean thought: “Bugger it, I’ll just set up on my own,” and persuaded Ian to join him in a new venture. Now they have a well-earned reputation as wide format experts, a fleet of vans, the prospect of a bigger warehouse and show suite, and a loyal customer base. This sets the foundation for the business and will allow Dean and Ian along with the next generation within the company to further push the boundaries and grow the business over future years. 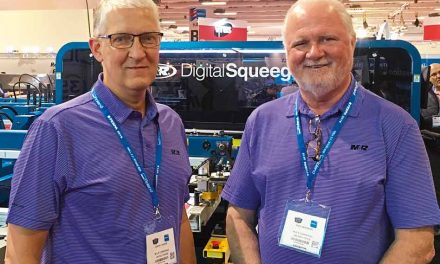 M&R – One step beyond 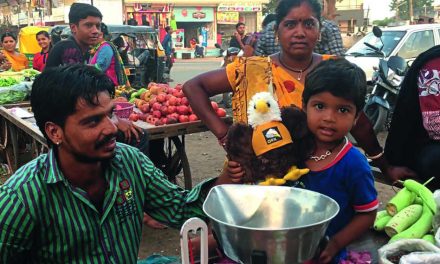 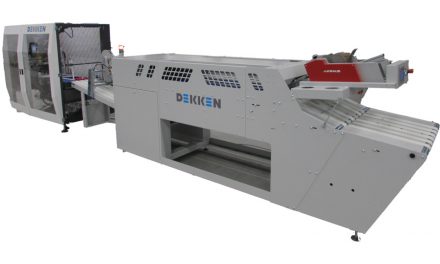 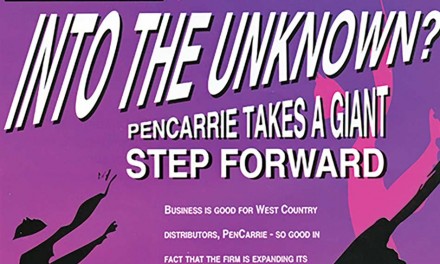