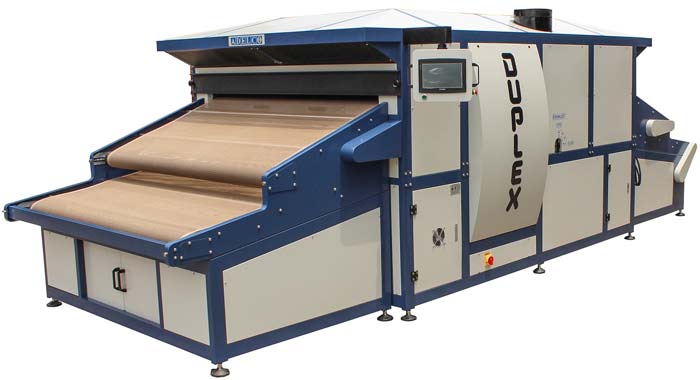 The Adelco Ecotex+ range of dryers incorporates an airflow and exhaust configuration developed from years of curing research on conventional water-based, discharge, plastisol and speciality inks from around the world, as well as all the water-based digital ink systems on the market.

Aldeco’s conveyor dryers also include features such as automatic digital belt speed control, air curtain cooling for a cool exterior and integral feed, and exit exhaust hoods for a cleaner environment, all coupled with an economical, gas-heated system.

Mark Smith, sales director of Adelco, comments, “We are very proud of our textile dryer products, being the core product in our manufacturing portfolio, backed up by the number of companies worldwide that return to us time and again to become multiple Adelco dryer users and the fact that we deliver over 100 conveyor dryers each year.”

Adelco introduced the Duplex in January 2015, which provides digital and conventional screen printers with six metres of curing in just three metres of oven space thanks to two conveyor belts, and uses a single gas burner and single 7kwh electrical connection. The two conveyor belts, upper and lower, each have independent belt speeds as well as independent, high velocity, jet air supplies. They can both be loaded from the front or side.

The latest additions to the Adelco dryer range are three-drawer and six-drawer cabinet dryer models that are aimed specifically at those with limited space requirements. Both have automatic drawers that eject the cured product when the independent timers have reached the end of their cycle.

The four pillars of dryer design

“SRoque, now known simply as Roq, has been well-known for producing best in-class automatic printing and bagging machines,” says Pyramid Screen Products. According to Pyramid, Roq has spent the past two years researching and developing dryers, briefing the team in charge of upgrading them to base the new models on four pillars: efficiency; reliability; build quality; and competitive cost price.

“Unlike other producers, Roq do not just supply a dryer, they create a solution for the customer based on a number of different factors,” explains Pyramid. “These include available size, inks used, number of pieces per hour required, the supply of gas or electric available, and from there they have the ability to custom-build a dryer to provide the solution that fits the customer’s needs.”

Roq offers electric, gas and even a combination of both across many different lengths and widths, with the in and out feeds also customised to the customer’s requirements. Dryers with dual belts that have the ability to run both belts simultaneously, in opposite directions, are also possible.

The RoqTunnel T6018G has a twin belt, creating a drying area of 5600 mm by 1800 mm. The twin belt means that both water-based prints and plastisol prints can be run through the dryer at the same time without having any adverse effects on the respective curing schedules for these products. 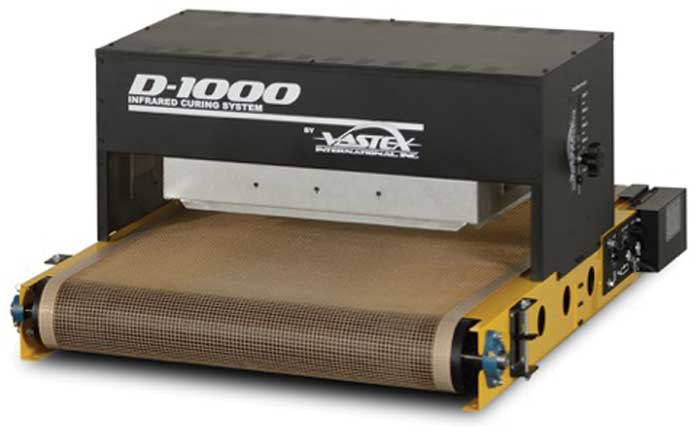 Dalesway Print Technology offers the full range of infrared dryers manufactured by Vastex in the US. “Vastex is well-known for the quality of its dryers and flash cure units in the screen printing industry and offers some of the highest quality emitters that money can buy, even in the entry-level range,” says Dalesway. “Testimony to this quality is the 15-year warranty on the emitter, which is arguably the most important component of a dryer, and a three-year warranty for overall defects.”
Vastex dryers are also modular, so if a shop’s needs change they can easily upgrade. “With the exception of the entry-level D-series dryers, all units are upgradeable, thereby future-proofing your business and giving you a high quality tool that will go the distance,” the company comments. “The ability to immediately double the capacity of your chosen dryer is a huge bonus. Simply purchase an additional heating chamber and belt extensions, and you double the output capacity. By adding another additional chamber you can obtain a further 30% increase in production.”
The Vastex range also offers a solution to those who are restricted on space and need a very compact dryer. Despite their small footprint, both the D100 and D1000 dryers can cure 110 pieces per hour. 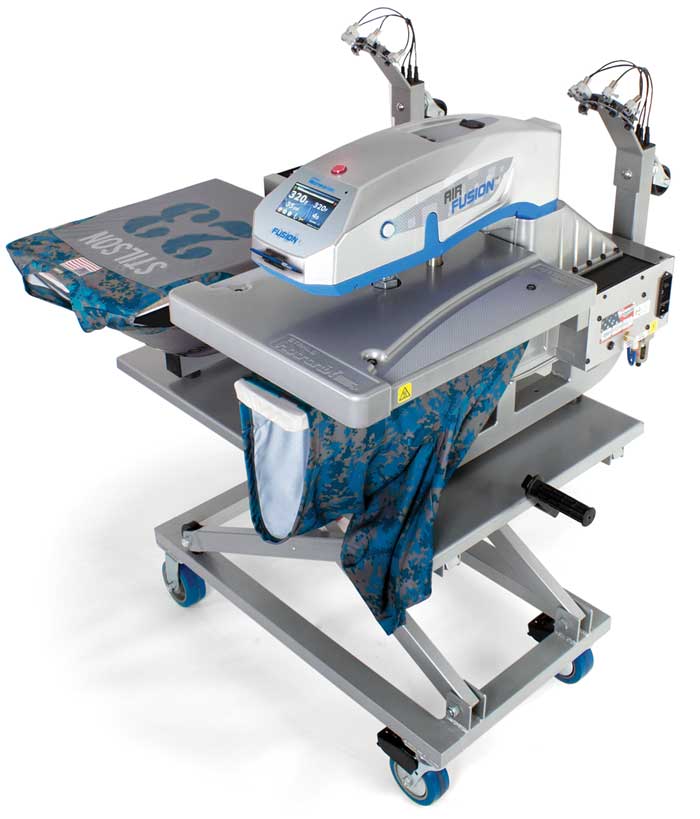 The latest addition to the Hotronix range of heat presses from Stahls’, the Dual Air Fusion, is now available from Target Transfers.

Launched in 2015, this is the first Hotronix heat press to feature two individual platens, which Target Transfers says allows a single operator to decorate garments almost 50% faster when compared to a standard swinger-style heat press.

“Stahls’ credits this performance gain to the Dual Air Fusion’s ability to rapidly ‘shuttle’ between individual A and B platen work stations, allowing you to individually program each with its unique time, temperature and pressure setting for different heat transfer applications,” explains Target Transfers. “For decorators serious about direct-to-garment printing, the Dual Air Fusion is the no-nonsense solution. Its technology turns the multi-step task of garment decoration into a single streamline process.”

The touchscreen control panels allow users to program station A for pre-treatment and station B for post-cure, which the company says leads to improved production speeds and print quality.
“With its new integrated Laser Alignment System and a wide selection of Quick Change Platens, it’s easy to see why the Dual Air Fusion is the ultimate solution for anyone serious about taking technology, performance – and profit – to a new level,” concludes Target Transfers. 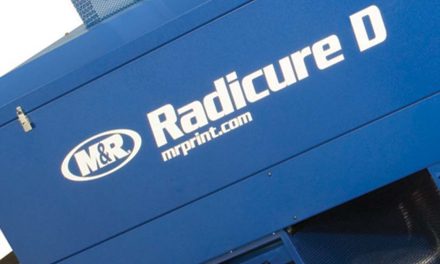 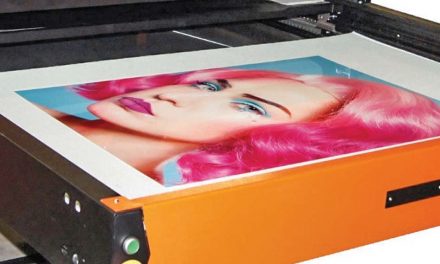