Print your own transfers 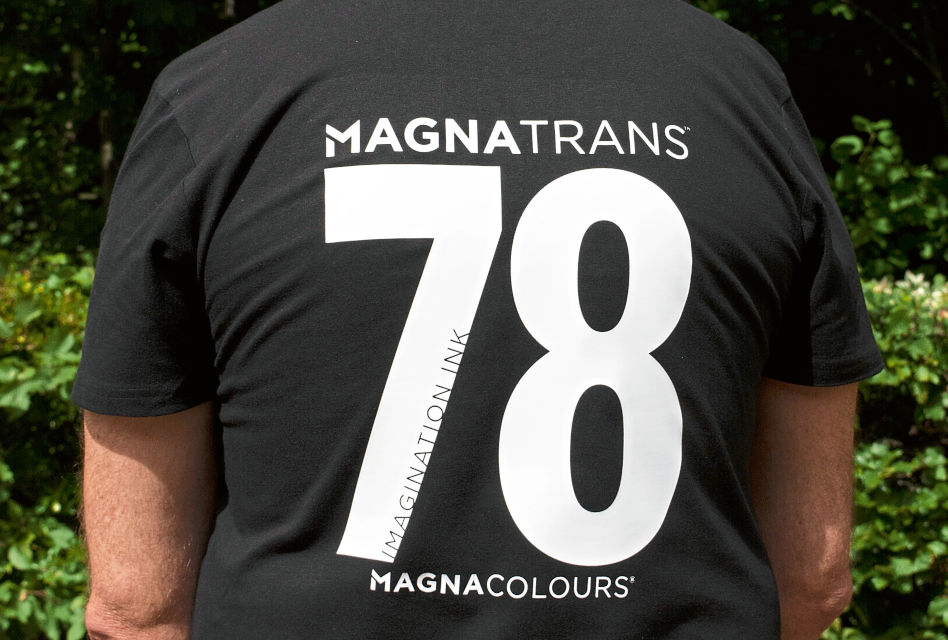 John Lynch of Magna Colours details how to screen print water-based transfers using the MagnaTrans range, which was launched earlier this year at Expo 2020 Long Beach in the US

Since the 1960s, heat transfers have been a staple of print production, states John Lynch of MagnaColours. “From corporate workwear to sports jerseys, transfer printing offers some key features not achievable with direct screen printing methods,” he notes.

“Transfers allow for designs to be printed ahead of time, ready for quick application to garments, making them ideal for use with repeat orders or in multiple split production runs.” They also allow for designs to be applied to areas of garments where direct printing is not possible, or on those fabrics that cannot be cured for long periods at high temperatures.

There are two main types of transfers used in production: screen printed and digital. “Digital transfers are a relatively new innovation,” says John.

“Using a transfer-compatible digital printer, such as a Ricoh or the HP Indigo, a full-colour image is printed onto the transfer film. When this is backed with a white ‘underbase’, it gives a detailed, full-colour transfer using minimal screens.”

Screen printed transfers follow a production process similar to screen printed garments, but the ink is applied to the transfer film instead of directly to the garment. “From the outside, transfer printing may look like a complicated and daunting process, but it is no more complicated than traditional screen printing,” he asserts.

John says: “Using water-based inks, such as MagnaTrans, gives a superior soft hand-feel and high-stretch finish, especially when compared to plastisol alternatives.” Artwork is separated for transfers in the same method you would use for screen printing high-solid inks–the only difference is the artwork is mirrored for exposure. When printing, the stations are printed in reverse, with the underbase screen being the last applied.

“Water-based transfer inks like MagnaTrans use similar meshes to direct screen printing – 34-90T (86-230). We have used a 43T (110) mesh screen for this design. As the entire transfer sheet does not need to be applied to the fabric in a single application, you can print multiple designs at the same time onto a single sheet to be cut down, saving time and money.”

Transfer films are available in a variety of finish options and for hot- or cold-peel application; the choice of film used depends on the manufacturing process and desired finish. In this step-by-step by MagnaColours’ print technician Melvin Hall, a MagnaTrans matt cold-peel film has been used. “Before printing, it is important to pre-cure the film to stabilise,” John explains.

“Most films have been pre-stabilised during manufacture, but can still shrink slightly during curing, which causes print misregistration. Pre-curing allows for any shrinkage that might occur to take place before printing (less than 1mm).”

Printing is done using a small holed vacuum flatbed screen printing machine. “There are many models and variants on the market, including manual and automatic options,” he points out. “The vacuum bed holds the film in place during printing. As the transfer film sheets are removed and replaced on the bed repeatedly during printing, mark the vacuum bed with PVC tape ‘registration marks’ to allow for consistent placement.”

Similar to direct screen printing, transfers are printed in layers, with the design built up over multiple screens and strokes. “Each layer of ink is applied with a 70-75° shore, square-edge squeegee in a single stroke,” says John.

“The biggest difference is transfers need to be fully cured between each ink application. Transfers should be completely dry before the next ink layer is added. Use a drying tunnel to cure for 60 seconds at 140°C. MagnaTrans inks are ready to print out of the pot with no activator required; a fixer can be added to adjust the curing temperatures if needed. Similar to direct screen printing inks, MagnaTrans inks can be pigmented with [MagnaColours] Eco-Pigments to achieve the desired colour.”

On fabrics and garments where dye migration is an issue, a migration blocker should be applied. MagnaTrans Migration Blocker stops the colours of the fabric bleeding into the design during washing or application. “It allows for whites and light colours in the transfer to remain strong and vibrant when applied to dark coloured polyester or Lycra. We have applied the migration blocker in a single layer [in this step-by-step] through a 43T (110) mesh screen to the design and cured it.”

Finally, a layer of heat-sensitive adhesive is applied to the design. “We have used a liquid adhesive – MagnaTrans Adhesive60, which offers a washfastness of 60°C,” John explains. “Liquid adhesive is less messy, more economically friendly and easier to use than traditional ‘scatter’ powder alternatives. Liquid adhesive is screen printed over the dried migration blocker or ink and cured. Traditional powdered adhesives are sprinkled or scattered onto the final layer of wet ink before curing,” he adds.

After printing, transfers are best left for 24 hours to obtain optimum washfastness, he notes. However, printed transfers can be stored for application at a later date. When the transfer is heat pressed onto the garment, the adhesive bonds the print to the garment and the release coating is activated. Removing the film leaves the transfer print adhered to the garment; this is done when the film is still hot or after cooling, depending on the type used. 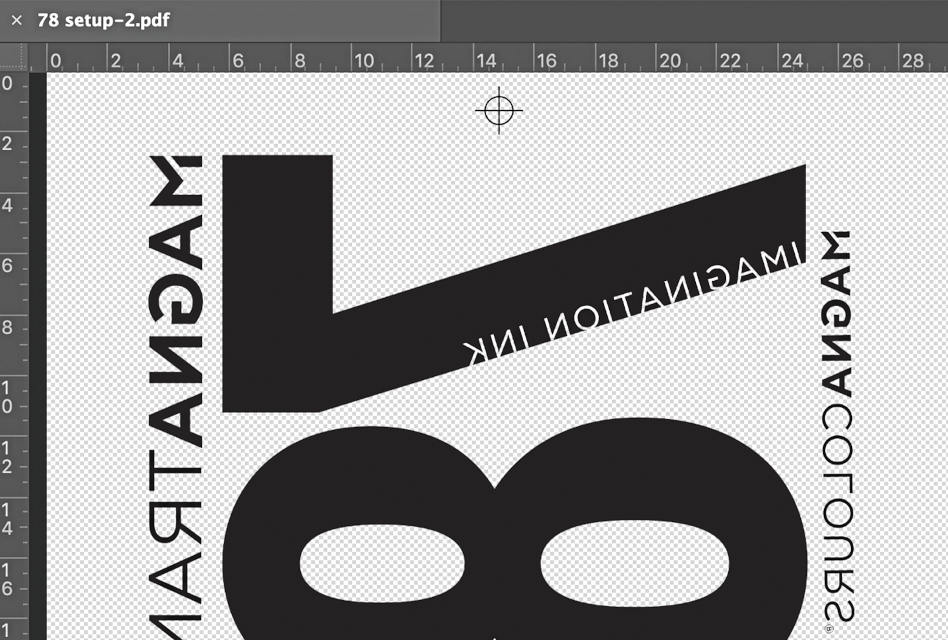 (1) Prepare and separate your mirrored artwork for exposure. Transfers are printed in similar layers to those used in direct screen printing, but applied to the film in reverse 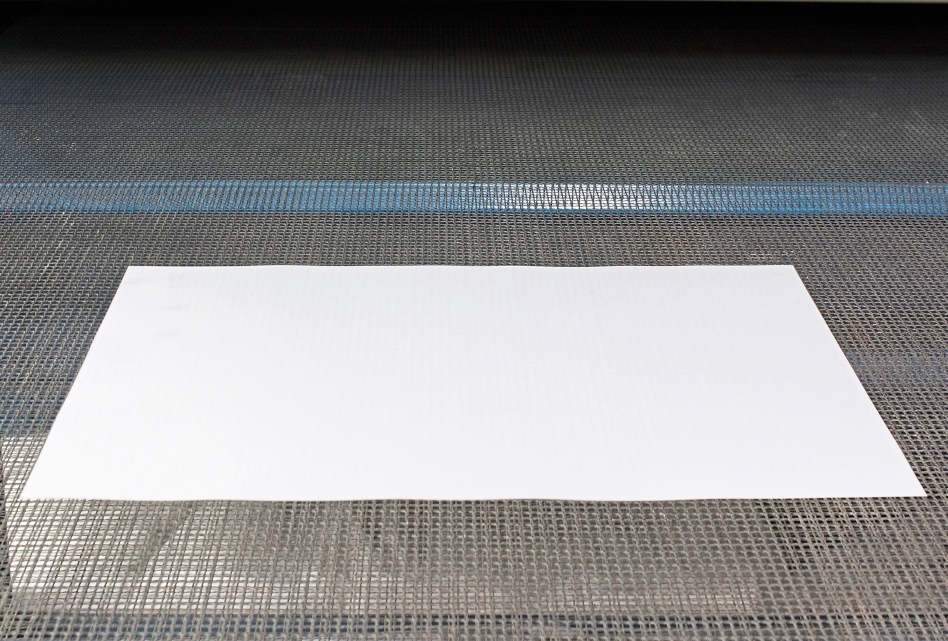 (2) Pre-shrink the film. Curing the film before printing will eliminate any shrinkage that may otherwise have taken place during production 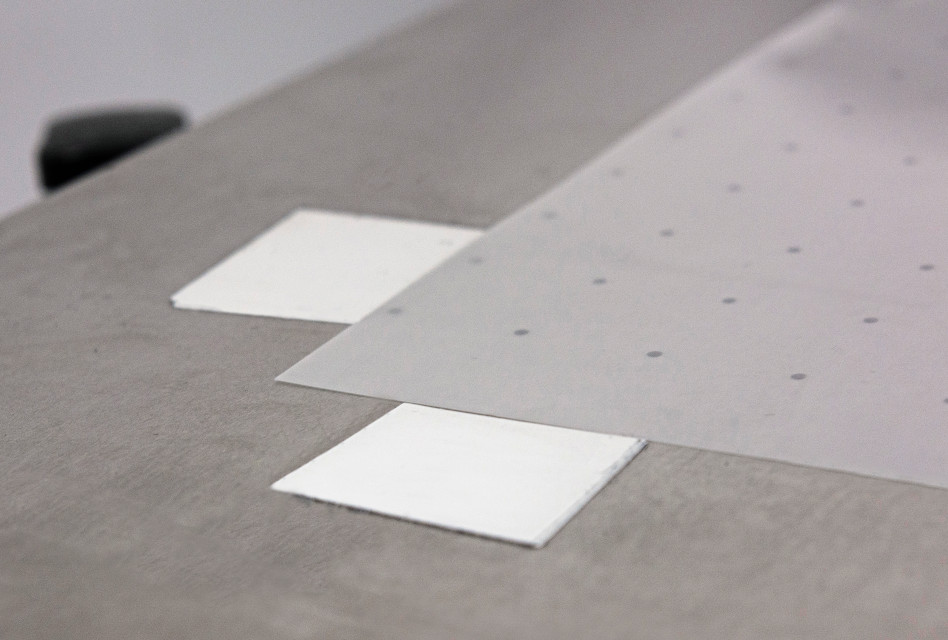 (3) Use a small holed vacuum bed to hold the film in place during printing. Mark alignment positions on the bed to allow for consistent placement of transfer films during production 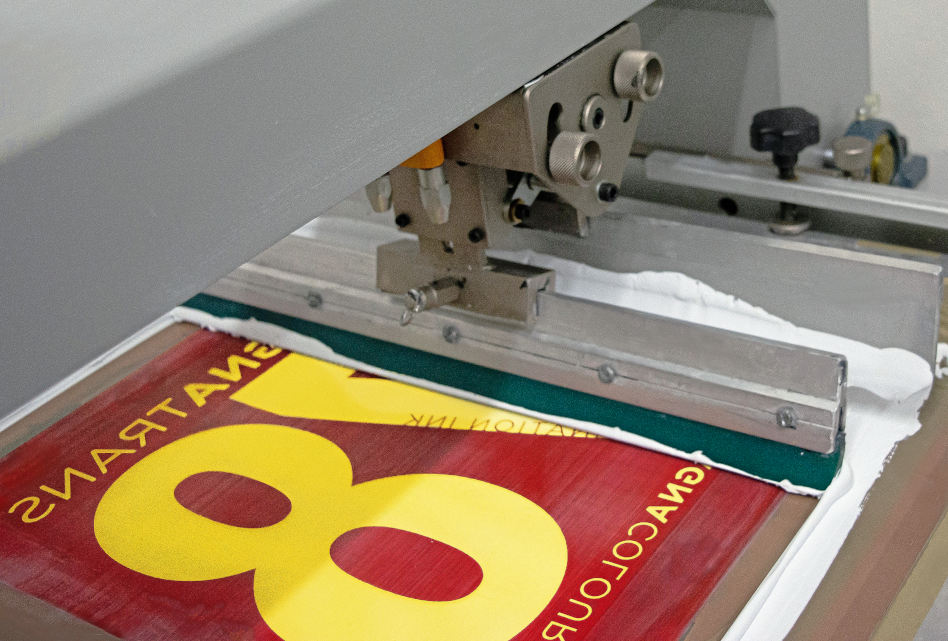 (4) Print the first layer of ink using a single stroke. Water-based transfers need to be fully cured before printing the next wet layer. Here, Melvin has used two layers of white, with each layer cured for 60 seconds at 140°C in a tunnel dryer 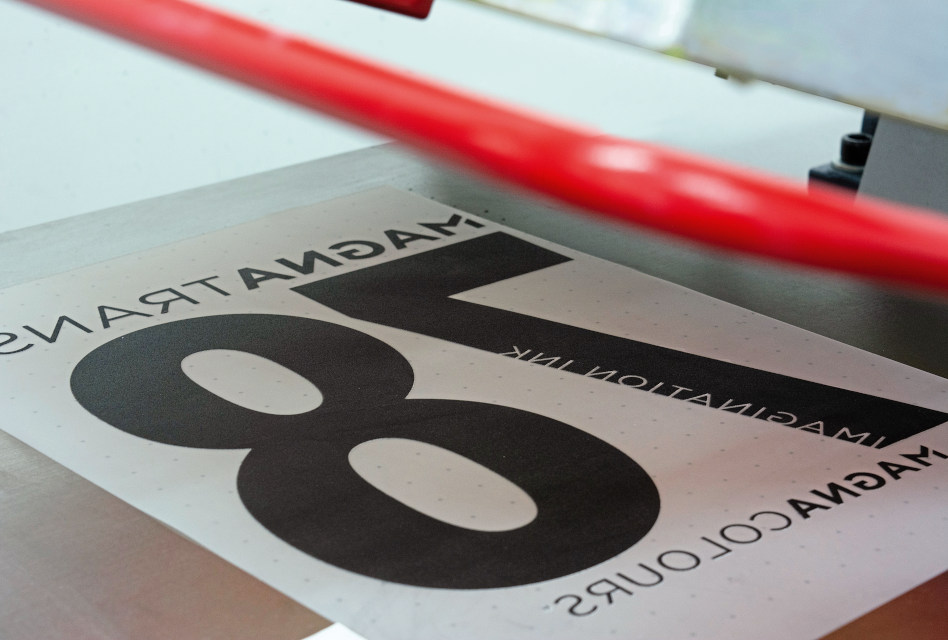 (5) Print a layer of MagnaTrans Migration Blocker using a 43T (110) mesh screen and cure it. This prevents dyes bleeding into the transfer print and helps to maintain the brightness of the design 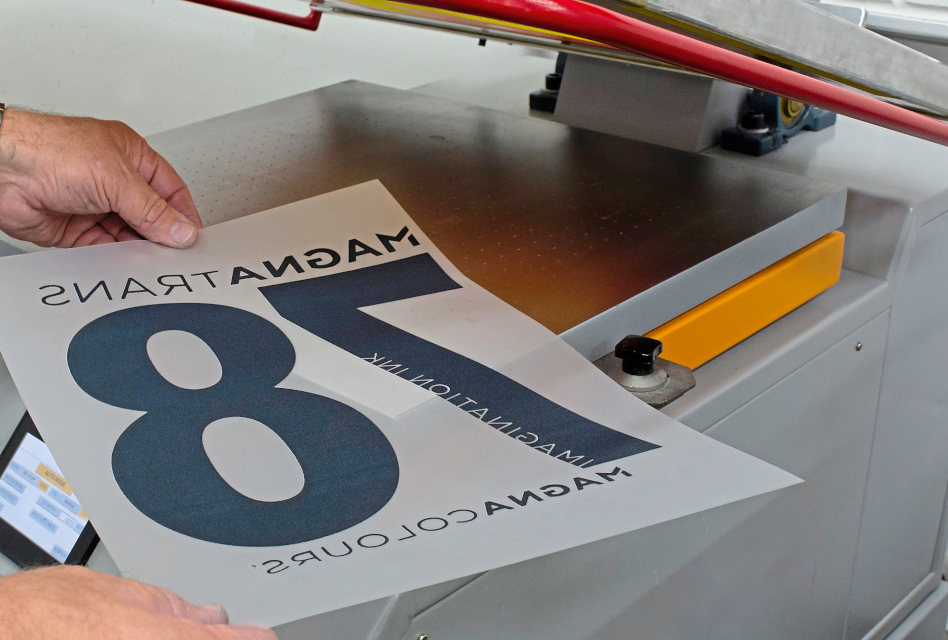 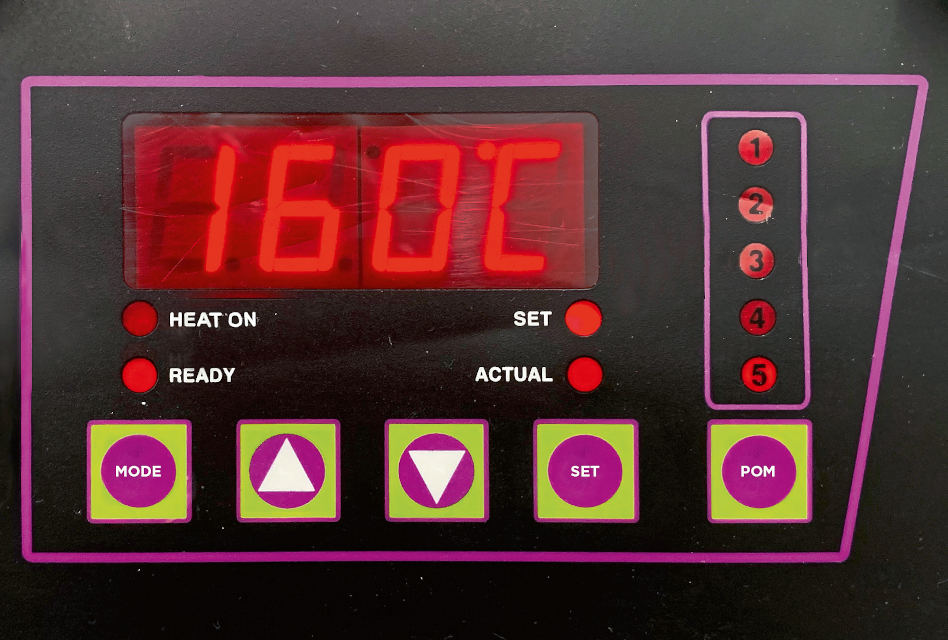 (7) Apply the transfer to the garment using a heat press at 120-165°C, 4-6 bar pressure, for 12 seconds. The heat and pressure activate the adhesive, bonding the print to the garment and releasing the ink from the film 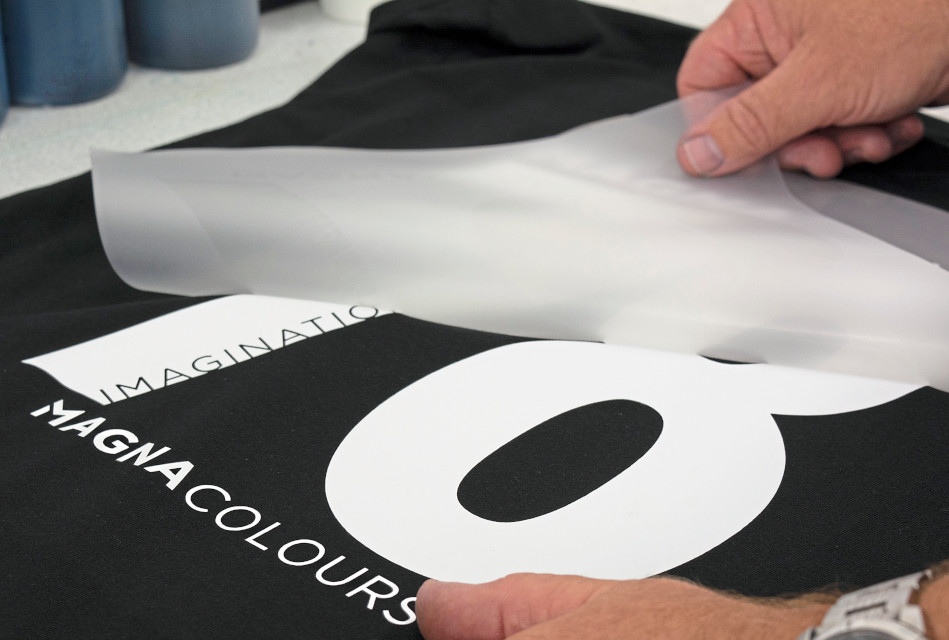 (8) When the print is cold, remove the transfer film from the garment. Allow the garment to rest for 24 hours before washing for optimum washfastness 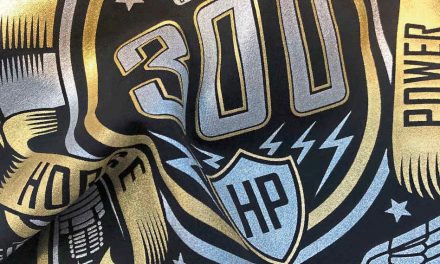 As good as gold 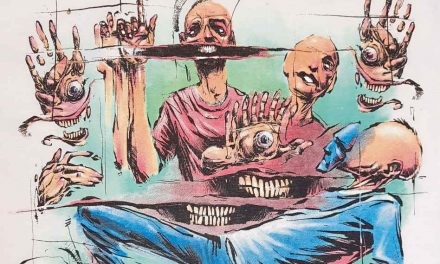 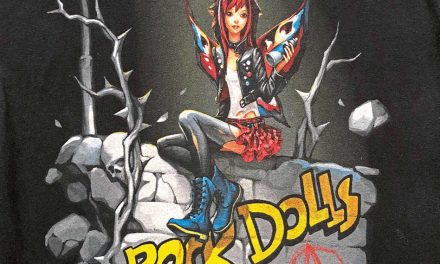 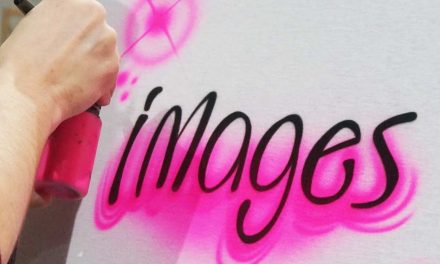 Brushing up on new skills