Going for the burn

Roger Law, of CadCam Technology, talks laser engraving and decorates a pair of So Denim jeans 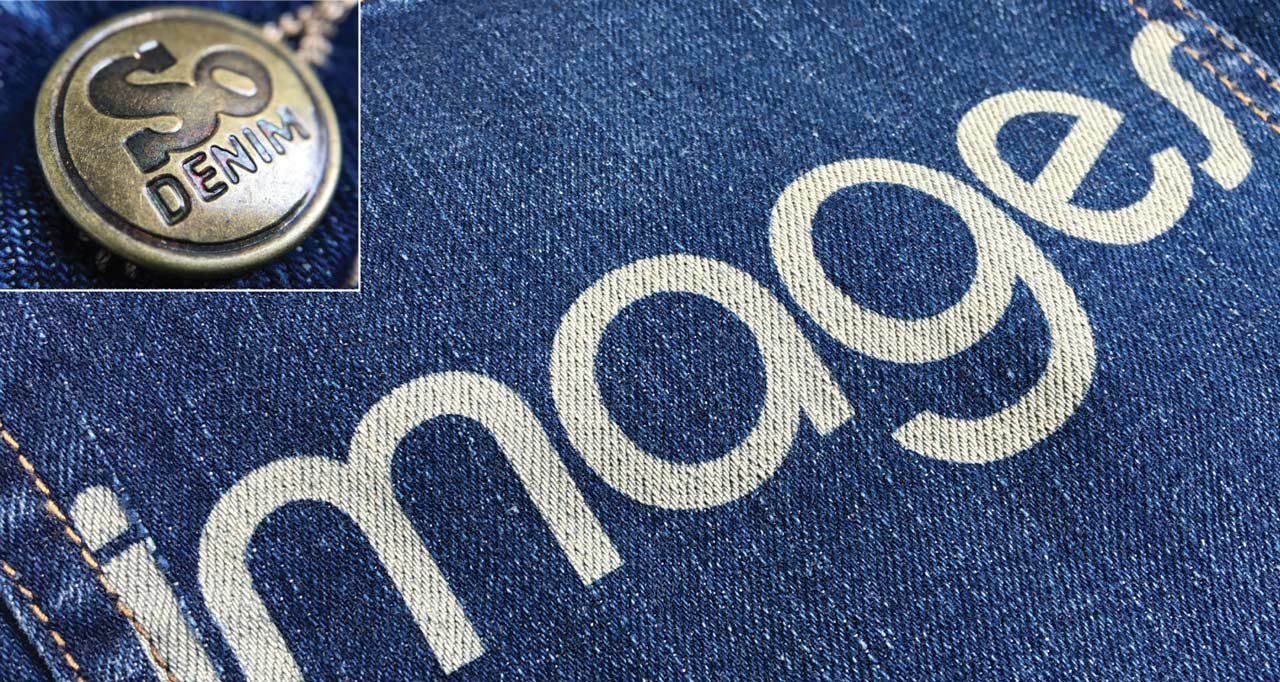 How do you go about making your business stand out from the competition? One option is to differentiate yourself by offering a service or process that few of your competitors are offering. One such process is laser engraving.

Laser engraving has been around for a while and you will have seen garments embellished using this process, even if you’ve been unaware of how the decoration was produced. The applications are incredibly diverse, ranging from bags and jackets to wallets, plaques, promo products and even cardboard greeting cards; however, this technique is especially well suited to the decoration of denim. So when we decided to produce a step-by-step guide to the laser engraving process we knew we would be running the demo on a pair of jeans. Likewise, it was a no-brainer to use samples from So Denim – the new imprint jeans brand, which launched at the beginning of the year. Interestingly, a So Denim brand manager had mentioned in conversation that several customers, keen to present the new trousers to their clients, had already asked for advice on how best to decorate the new garments…

We asked Roger to demonstrate the process by engraving the Images logo onto a pair of So Denim’s men’s straight jeans (the brand supplied samples in three shades – light, mid and dark blue – so we could fully explore the decorative possibilities).

Roger chose to use the smallest of the laser engraver models – the GraphixScan 500, which has a maximum engraving area of 500 mm x 500 mm, a maximum engraving speed of 3300 mm/second and a choice of 50w, 100w, 200w and 400w laser power settings. (The company produces a selection of models from the GraphixScan 500 up to the flagship GraphixScan 1800 model.) Roger explained that by altering the speed, the power and the spread (focus point) of the machine’s laser beam, it is possible to remove varying amounts of the jean’s dye and the fabric to create up to 64 different greyscales. He added that the laser’s spread goes down to 0.3 mm, and also that by raising the machine’s bed the focus point could be reduced further to reproduce even finer, higher resolution designs, (albeit with a corresponding reduction in the maximum engraving area).

To start with, Roger imported the Images logo into the GraphixScan software, which can handle vector and raster images. Roger imported the Adobe Illustrator eps file as a raster image so that he could then demonstrate how easy it is to recreate a raster design as a vector image using the software’s own advanced tracing system. The vector image’s paths can be used to create an outline effect or as a cutting guide: as well as engraving, the GraphixScan is powerful enough to cut out shapes from thin materials if required. Roger saved the file as a 150 dpi greyscale tiff: high-res files aren’t required as the textured surface of the denim itself limits the degree of detail that can be resolved.

The software has a menu of pre-programmed fabric and material types and their associated settings, making it a quick and simple task to set up the file for output. The operator can tweak these settings or choose to input settings manually, if they prefer. Roger pointed out that setting the laser to move horizontally across the Images logo would give the fastest engraving speed (as there are fewest direction changes); however, for the video footage we were shooting, he opted for vertical travel so that a discernible design would begin to ‘appear’ sooner.

Roger next demonstrated how to set up the engraving area to help with the positioning of the garment or other substrate on the bed. For the So Denim jeans, we elected to engrave the Images logo on the back pockets, so he traced a pocket shape around the logo on-screen. The software was then able to use this template to pick out the engraving area on the actual jeans using the machine’s LED positioning lights. With the bed lit up with red guide lines, it was a simple matter to slide the jeans into position by eye. 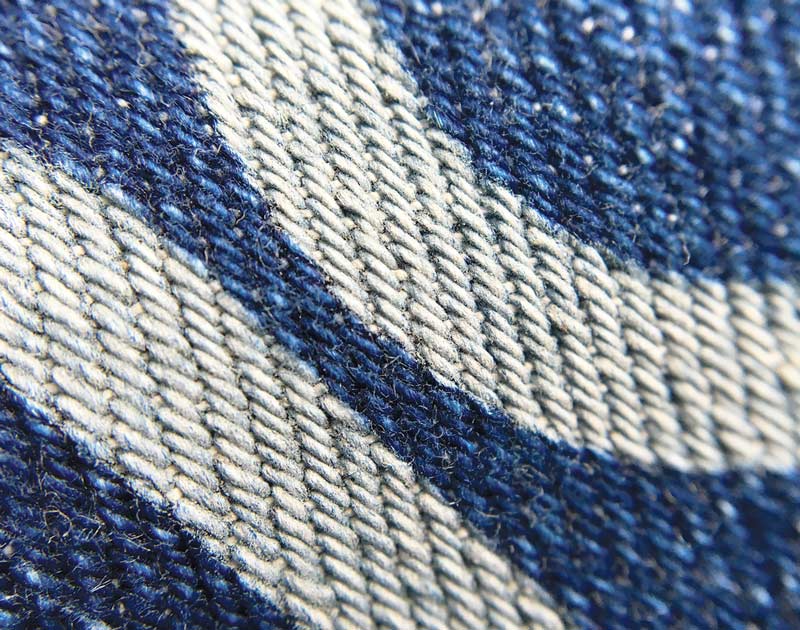 A close-up of the engraved denim 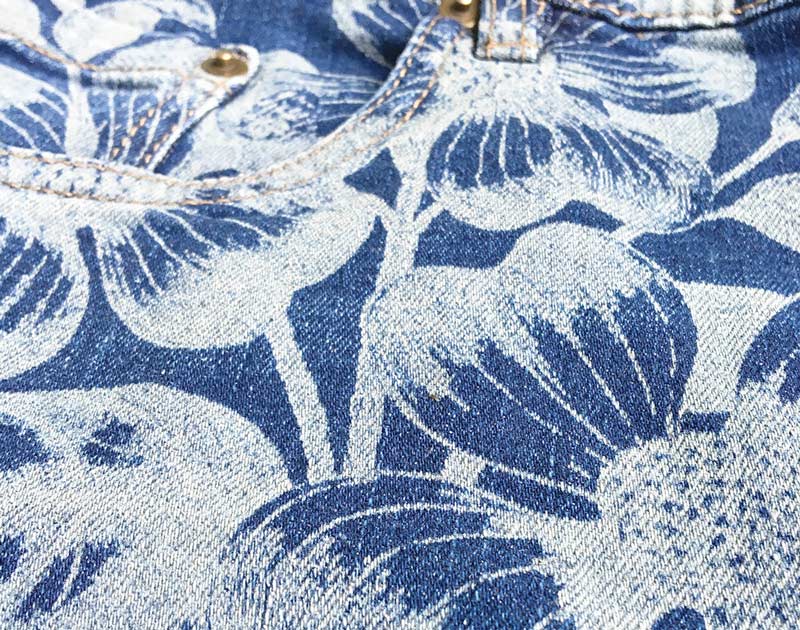 Once the jeans were in place, Roger hit the output button and the safety canopy slid down to prevent any unwanted engraving of fingers or toes. Then, in a puff of smoke, the logo started to ‘magically’ appear on the jeans. The laser beam itself is invisible to the human eye, but when it strikes the fabric the light energy is converted to heat, removing a precisely controlled depth of fabric and dye.

We opted for a fairly shallow ‘bleached effect’. The degree of engraving was dictated by the power and speed of the laser and also the hue and shade of the dyed fabric. We noticed that the system produced a far more subtle effect on So Denim’s men’s light jeans compared with the dark rinse jeans, mainly on account of the lower contrast between the engraved and unprocessed areas.

Roger pointed out that the engraved area can take on a subtle yellow hue after engraving from the smoke (or gases) created by the heat from the laser. This disappears after washing to give a clean finished design.

Having successfully engraved the Images logo, Roger proceeded to really put the GraphixScan through its paces, engraving a variety of intricate shapes and floral designs. Next, he increased the power so that the laser beam cut a pattern of small stars in the denim, and then demonstrated how the machine can be used to create the ‘whisker’ wear patterns that are so popular on fashion jeans. “When cutting patterns through the fabric you have to make sure that the design is spaced right so that there is enough fabric left between each of the holes and you don’t just end up with one big hole!” he explained.

Before wrapping up the demonstration Roger also showed us how the GraphixScan can be used to engrave subtle designs onto polyester softshell jackets and polar fleece fabrics as well as cutting intricate designs from leather and cardboard. “There is a big demand for laser cutting in the gift card market,” advises Roger, pointing out the potential cross selling opportunities for garment decorators who invest in a GraphixScan.

Laser engraving is well established in the fashion market and the effect lends itself well to the branding of denim work trousers. Roger adds that its is also popular within the automotive industry, for the subtle branding of interior upholstery and carpets as well as manufacturer’s softshell and fleece jackets.

The Graphixscan 500 costs in the region of £36,000. For those garment decorators who want to offer laser engraving to their customers but aren’t ready to make such a capital investment, GS UK also offers a commission laser engraving service, using the GraphixScan equipment. Contact Julie Spooner at GS UK for more details.

The Graphixscan can cut through thin materials, making it ideal for producing appliqués. Roger set up the Images logo as a raster file and engraved the logo onto a spare piece of denim. He then created a vector path in the shape of a round cornered rectangle and used this as a guide for the Graphixscan to laser cut the design from the denim. The finished result was notable for its neat edges and was ready to be stitched onto a garment or other product.

The Graphixscan’s precision control allows the laser to cut through a single layer of fabric, leaving the underlying material untouched. This makes it possible to create pre-stitched appliqués, which are cut while still in the embroidery frame.

The Graphixscan Sprinter 800 brings the same creative control to screen printing presses. This in-line laser cutting system is used to cut or engrave intricate patterns up to 800 mm on garment and garment panels, on-press, and in perfect registration, while the printer is laying down ink at the other stations. 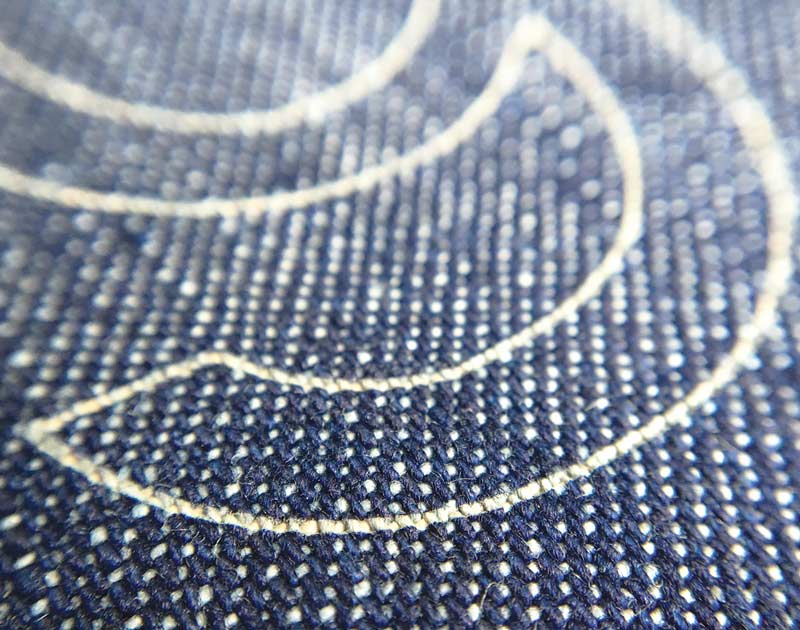 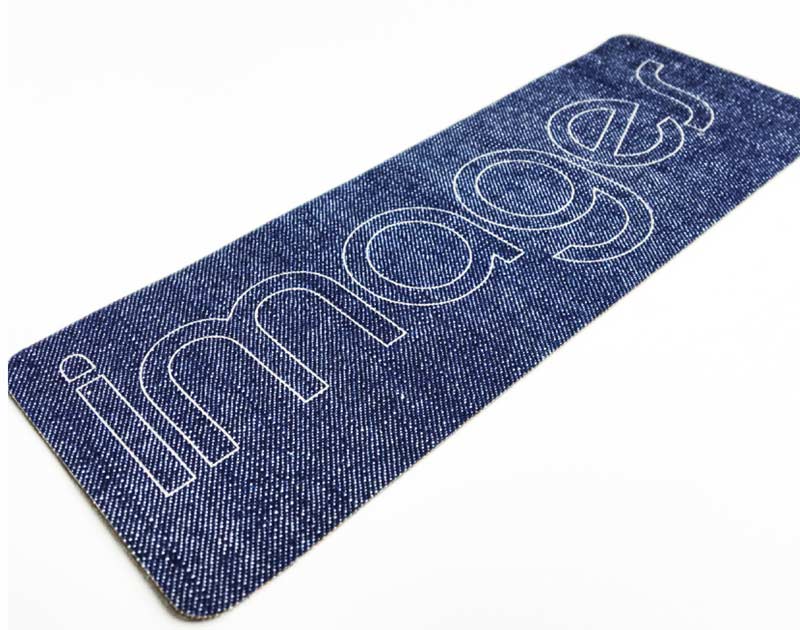 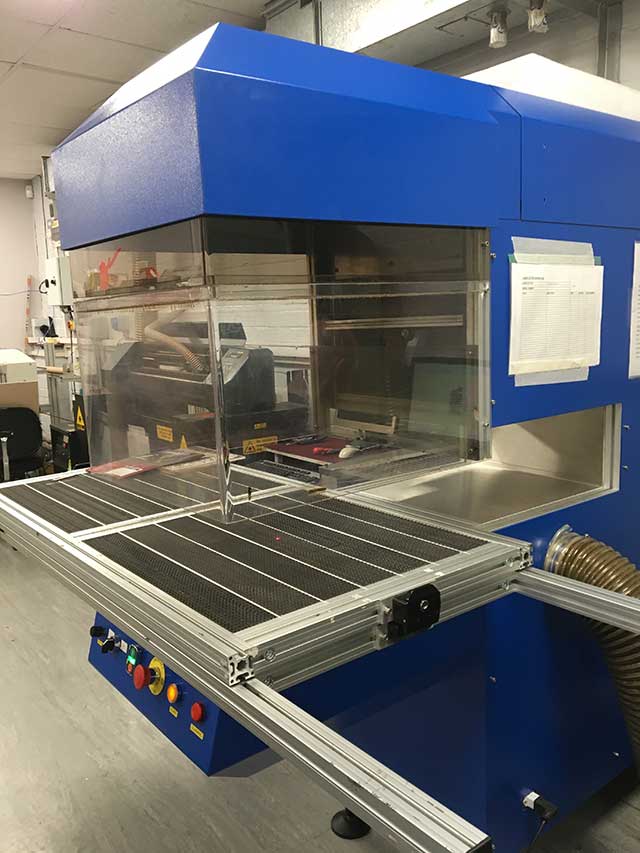 The advanced Graphixscan software controls the precise focusing and positioning of the laser, which is fired through a z-axis dynamic focus lens onto a y-axis paddle mirror, which bounces it onto a second – x-axis – paddle mirror, which then reflects the beam down onto the substrate. The software reads the greyscales in the artwork and adjusts the power of the laser to create different shading effects. It also continuously adjusts the position of the two mirrors to move the laser beam across the substrate, recreating the design. The more powerful the laser beam and the slower it moves across the substrate the greater (deeper) the engraving effect. 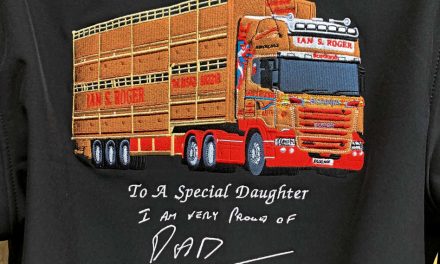 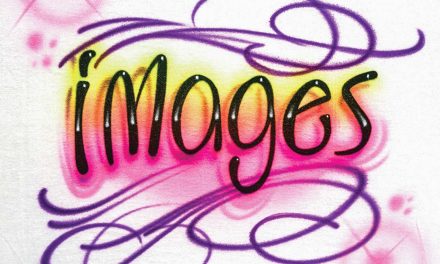 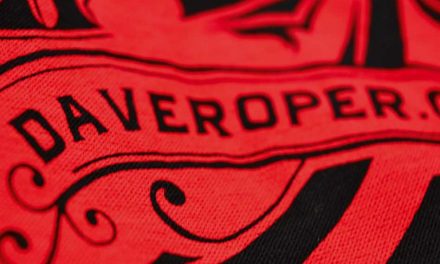 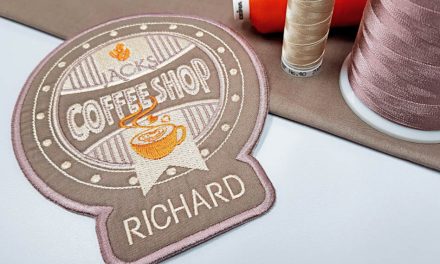