Bringing the X-Factor to DTG 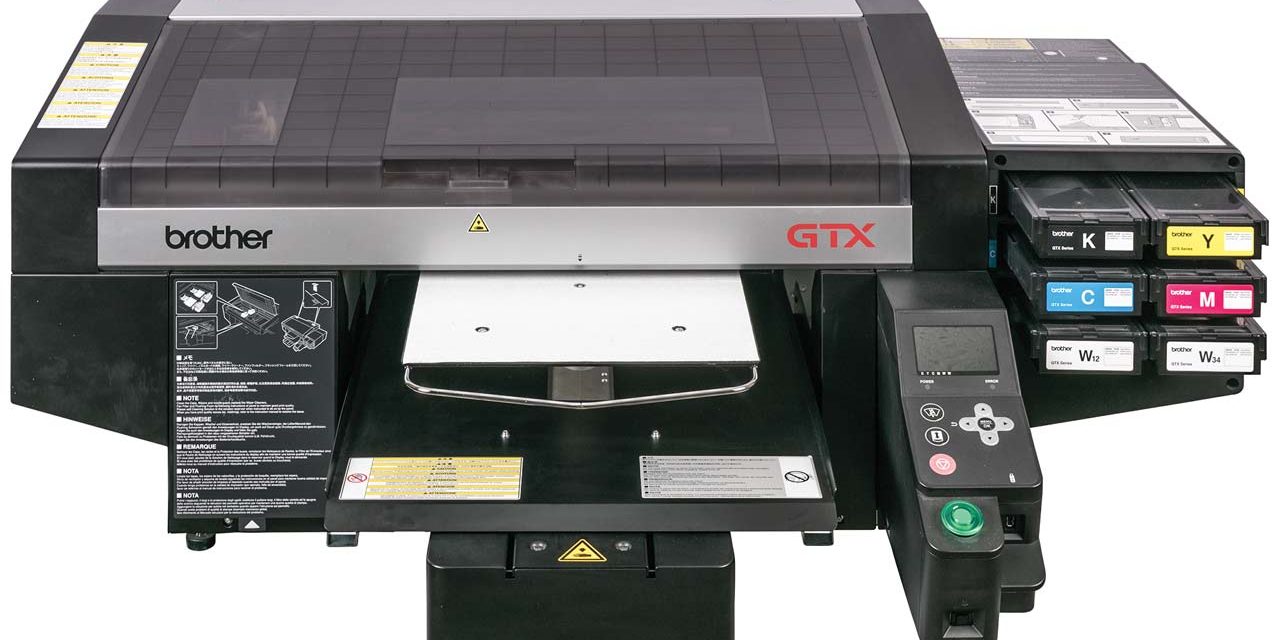 The Brother GTX-4 promises industrial DTG printing performance that’s tailored to customers’ needs and all for less than £20,000. But is it a game-changer?

“I’ve run this machine for a couple of days and I have to say it is a game-changer,” states John Potter, managing director of MHM Direct GB. He’s talking about the latest direct-to-garment (DTG) printer from Brother, the GTX, which the company says produces “high quality prints at mass production level speed”.

The spec sheet is impressive: it uses industrial print heads that Brother confirms are the fastest it has ever developed for garment printing (and they come with a one-year warranty, like the rest of the machine). The two heads contain 1680 nozzles each across four channels, with CMYK going to one head and white to the other head. The white head is stacked behind the CMYK, resulting in 1200 x 1200 dpi printing in a single pass. “All this is in a sub £20,000 machine!” John exclaims.

So what does all that mean in terms of real-world performance? Brother reports that two GTX printers can print up to 80 dark garments an hour and 120 light garments an hour under production conditions. The company argues that this performance is comparable with that of a competitor’s dual-platen industrial DTG printer, which costs approximately five times as much as the two GTXs combined. 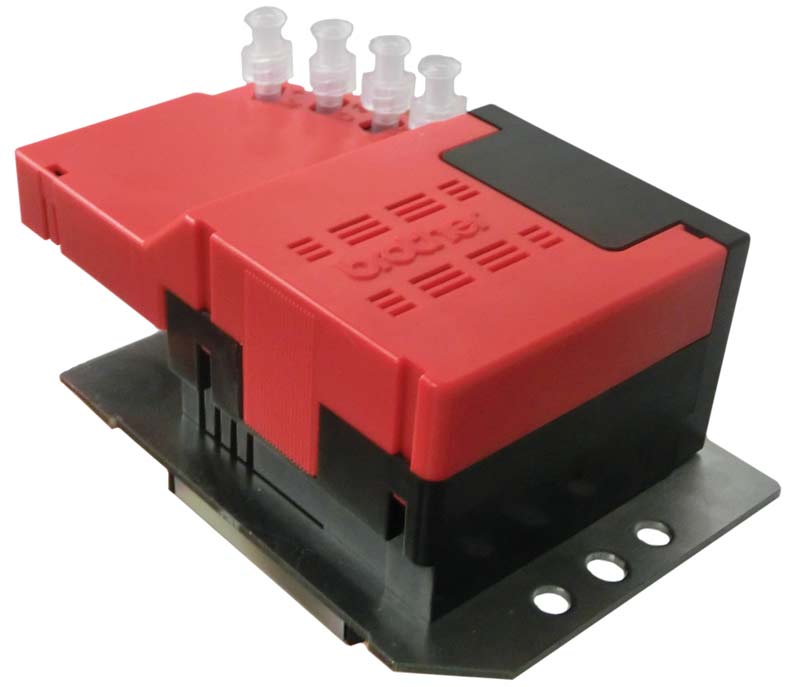 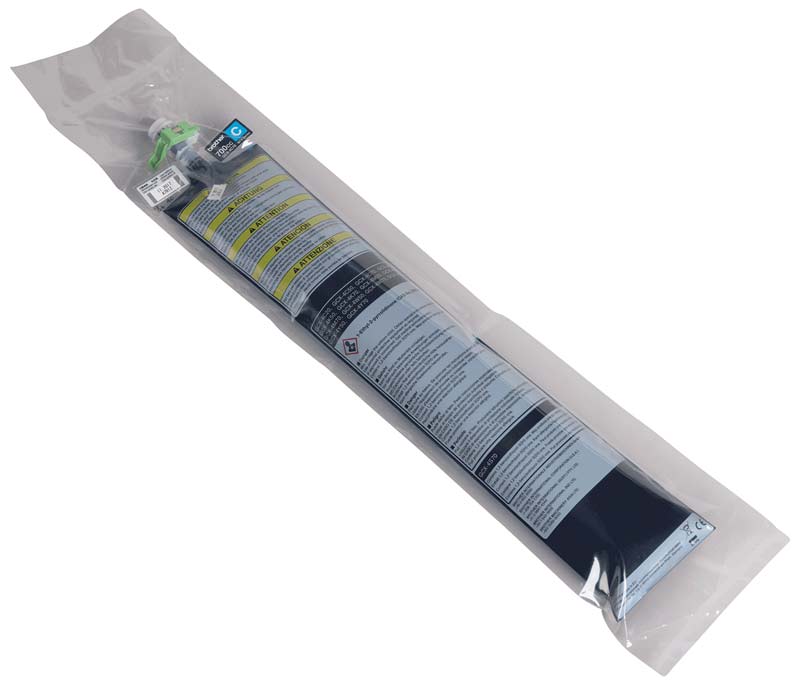 “The main thing for me is that this machine’s been designed by the customers,” continues John. “Customers have said, for example, that they want minimum maintenance, they don’t like to have to do all the white tube flushes all the time. So Brother has done that: it put a white circulation pump on the GTX to circulate the white ink, so you don’t have to flush the tubes out every week. The tube flushing is now at an absolute minimum – and the machine will tell you when it needs to do that. Brother had a GTX on its premises on trial and the printer didn’t ask for a white tube flush in six months. Normally, it has to be done every week and takes an hour.

“It also has a wet capping station, which means that the print heads are sitting in wet fluid all the time, avoiding blockages, which is great.”

The design of the machine is certainly sleek and aesthetically pleasing. John explains that it has a lower profile, which from a practical point of view makes it easier to operate. It also has a much larger print area than the GT3 series: it can print up to 16” by 21”, compared to the maximum print area of 14” by 16” offered by the GT-381. The platen can also be lowered by 30mm, allowing thick objects to be printed as well. This also makes it easy to print over zips, pockets and seams, as well as printing onto shoes, hats and other irregular items. Existing Brother DTG owners will be pleased to learn that the platens from their GT3 series printers can all still be used on the machine thanks to a special bracket that ships with the GTX. 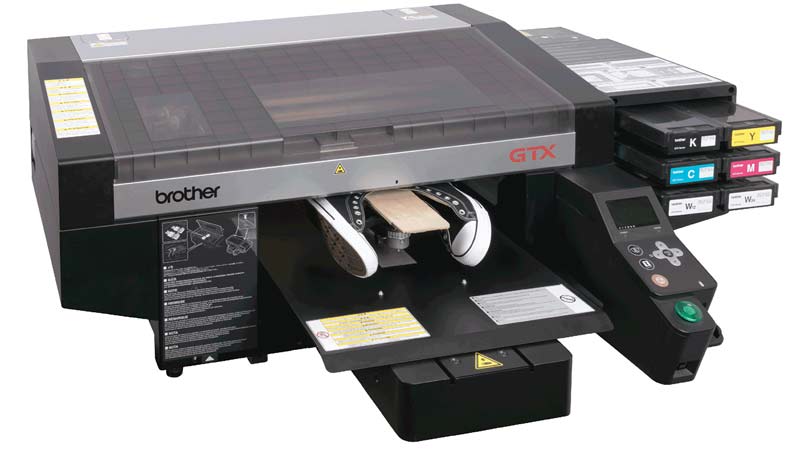 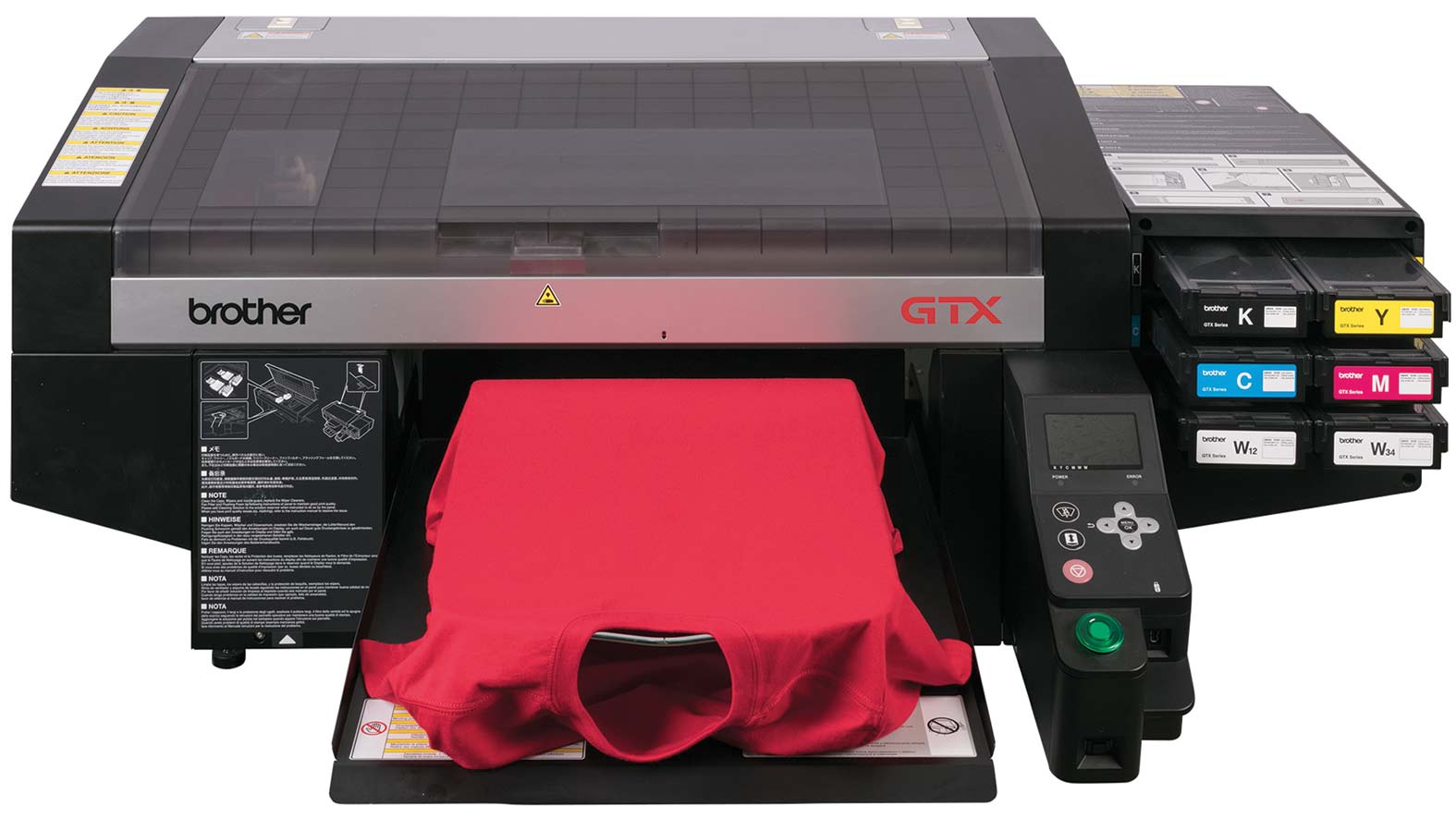 The list of well-considered features introduced on the GTX extends to an internal temperature gauge and humidity sensor: when the humidity or temperature drops out of the optimum operating range, the printer will slow down automatically in direct response to the changes. “You’ve got a lot more flexibility with this machine,” John reports.

The new GTX can also store up to 100 designs in its memory, up to a total of 800 MB. According to John, “The designs can easily be selected on the menu – the display shows a picture of the design. If you’ve got a shop and you do only 100 designs, you can just flick through them on the screen without even having to connect a laptop to the machine.”

Bundled with the new printer is Graphix Lab, a new proprietary printing software that will allow users to import artwork; add text; rotate, size and position elements; and apply artistic effects. The Graphix Lab software and the GTX printer driver are compatible with both Macs and PCs.

As well as developing the new printer architecture for the GTX, Brother has also developed a new ink set, called Innobella Textile. The water-based pigment inks are Oeko-Tex-approved and have scored 4.5 out of 5 on the AATCC washfastness test. John says that this rating is higher than that of the previous ink set developed for the Brother GT3 series printers while offering a wider colour gamut. “And they’re cheaper, too,” he adds. 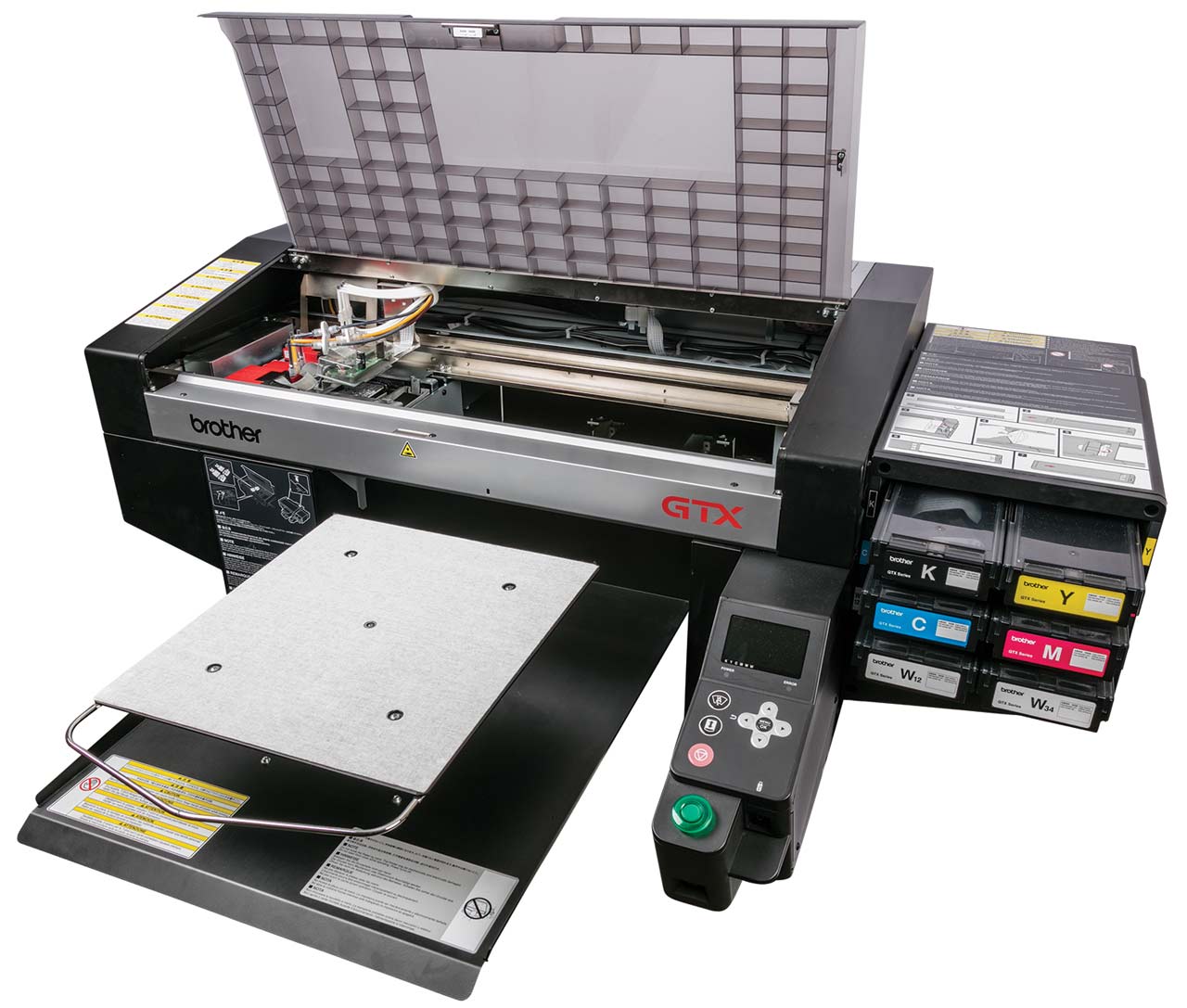 A view inside the new GTX-4

“Another area where Brother has listened is where customers have said that they don’t like throwing away the big plastic ink cartridges when they’re empty. The new machine uses pouches instead. You put the pouch inside a cartridge that’s inside the machine and as you close the lid, a little roller ingeniously rolls up the pouch and squeezes all the drops of ink out of it, like a tube of toothpaste. It’s very clever as it means all the ink is used, and from an environmental point of view, when it’s empty, the only bit of rubbish is a small pouch as opposed to a great big cartridge.”

The GTX is an impressive-looking machine on paper – fast, affordable, flexible and using fully eco-certified inks. What will be interesting is seeing how it performs in action against its competitors under print shop conditions. The Brother approach of listening to customers and technicians and responding to their feedback is to be applauded – as John says, “It’s been designed by the printers, by the customers.” If the company has listened carefully enough to deliver on this wish-list then there’s every reason to believe that the GTX could indeed live up to its billing as a genuine industry ‘game-changer’. 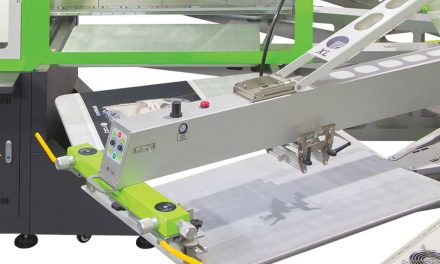 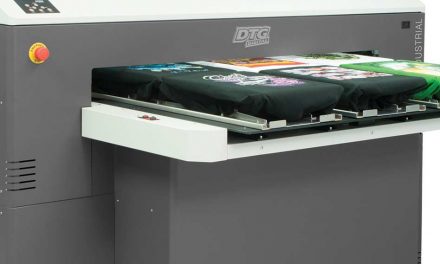 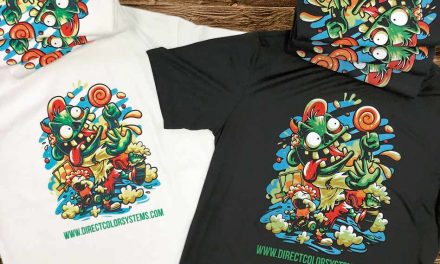 It’s DTG printing, but not as you know it 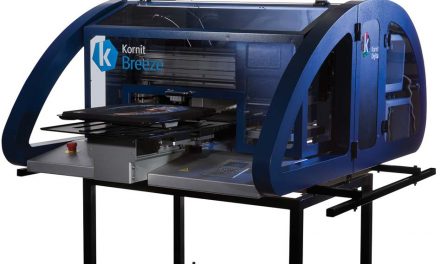