Ten years ago, Luke Hodson dropped out of uni when he received an order for 80,000 badges. His company Awesome Merchandise now employs 47 people and made 8 million items last year

It’s easy when walking into the machine-packed 11,000 sq ft unit housing Awesome Merchandise in Leeds to gawp at how much its co-founder Luke Hodson has achieved by the age of 30. But, as he quickly reminds you, he and his wife Charlotte have been running the business since they were 19.

Luke and then-girlfriend Charlotte rocked up at Leeds University just over ten years ago with a badge machine and an ambition to earn enough during term-time to avoid the usual student holiday ritual of working in a factory. The first year saw Luke run badge-making business Awesome Badges from his bedroom in student halls, and then in the second year, when he changed degree from law to politics, he set up shop in a shared student house with ten-bedrooms. “I ended up taking the bed out of my bedroom and making it into a little office and factory, but it spread into all the corridors and the lounge and everywhere. My housemates were pretty understanding, looking back on it,” he laughs.

In the second year of his politics degree the pair received an order for 80,000 badges for comedian Bill Bailey’s tour. He and Charlotte had three weeks in which to create the badges and make up 20,000 packs of four badges. Luke left university and fulfilled the order with a couple of part-time staff in the small unit they had just taken on, with Charlotte joining him in between lectures.

Today, Awesome Badges is called Awesome Merchandise and the pair both work full-time for the company along with 45 members of staff. Building work is underway to knock through to the factory next door and increase the production space to 20,000 sq foot. This will allow the Awesome to let go a separate 5,000 sq ft unit across the way and bring its entire operation under one roof.

The unit has specific areas for staff to take breaks

The company’s growth has been fast yet steady. “It’s been ten years of continuous fast growth – not 500% a year, but 50% or 40% growth year-on-year,” says Luke. “We never really had any expectations, we just keep trying to make it better and keep growing.” The badge-making machine was followed by digital work such as posters and stickers, then plectrums and drumsticks. Wide format machines were brought in for banners, but they continued outsourcing T-shirts until four years ago when they brought the screen printing process in-house, as well as adding embroidery. “Screen print has been good, it’s been interesting learning the process and dealing with the increase in scale with garment production. We’ve invested really heavily in the automation around screen making and reclaim.” They currently have two automatic presses (six-colour and ten-colour), a single colour manual press, a screen cleaning and reclaiming machine and an automatic folding and bagging machine. On the embroidery front they have an eight-head, six-head and single-head.

One of the aims of the expansion, as well as future-proofing the business, is to make more room for more screen print, embroidery and garment equipment. Luke went to SGIA in Atlanta at the end of 2015 to look at direct-to-garment machines, but has yet to buy one. He comments, “I like the Kornit but the price tag is a bit crappy. They do look good and we’ve got so many digital processes in the factory that it does make sense, but it’s the output versus the cost of the machine. If you’re selling £10 T-shirts all day then I get it, but… We’ll do it at some point, I’ve got no doubt. We’ve got the customer base to do it. I think the price of digital is going to come down a lot at some point.”

When opening the door to the industrial unit that is home to Awesome Merchandise, visitors might feel a moment of confusion on seeing picnic tables, a football table, pink neon signs, a retail-looking display of Awesome-branded merchandise, comfy chairs and two long pre-fab wooden sheds, for want of a better word, that are painted in seaside-resort-style pastel colours. Through the sheds’ windows are rows of people quietly tapping away at computers, while the factory itself is hidden behind the office area.

“When we moved here two years ago we doubled our space so we planned to have a dedicated area for staff to have breaks,” explains Luke. “In the other unit we didn’t have any real lunch-break rooms, just a tiny kitchen. It was important that it was a nice place to come to every day. We figured we’d make it fun and added stuff like the table football and breakout spaces so people can enjoy their breaks.” According to an infographic of the company’s stats, 2,500 games of table football were played in 2015. (It also notes that they made a staggering 8 million items and gained 10,000 Instagram followers last year, both of which are almost as impressive as the table football stats.)
The company had been paying the living wage for 18 months before it became a legal requirement. “We’d always paid well above minimum wage even when we started because I’d worked minimum wage jobs and it was rubbish,” says Luke. “It’s better for staff to be paid fairly. We want people to have a career with us, and we want to make it a good place to work.” They have a number of people who have been with the company for five years now, which, given many of the employees are in their 20s, indicates the approach is working.

As for who the customers are, that is less easy to define. In 2015, Awesome carried out jobs for just under 11,000 different customers from across the UK as well as some in Europe and a few from the US.

“Our biggest client is less than 1% of our turnover. We’re first and foremost an internet company. We do have a local element increasingly because we’ve got good relationships with a bunch of people, but we started out on the internet and we’ve grown the business on the internet, so our customer base is spread across the country.”

One trend that he has noted is an increase in the number of people selling items on sites such as Etsy. “A lot of illustrators and designers are now able to make a living creating products with their artwork on it,” comments Luke. “We’ve seen a big uplift in that, whether it’s tote bags, tea towels, mugs or T-shirts. More and more people are either making a living or pocket money from selling their designs online.”

With a top secret website planned for 2016 as well as the current expansion of the unit, Awesome Merchandise is more than living up to its name – a name that comes from the title of a song by a band Luke saw in America at the end of his gap year. “I thought it was pretty funny and that it would work as a name. The word awesome was a bit less frequently used ten years ago, but we like it because it sets high expectations. It would be the easiest thing in the world if we mess up for someone to say, ‘This isn’t awesome, it should be called Crappy Merchandise.’ We don’t make mediocre merchandise; it’s always got to be awesome.”

The expansion of the unit will allow for more embroidery heads 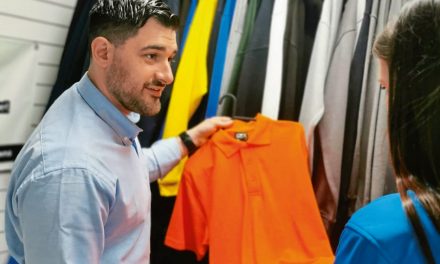 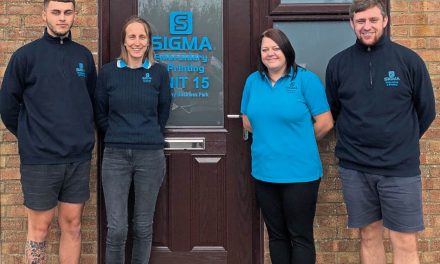 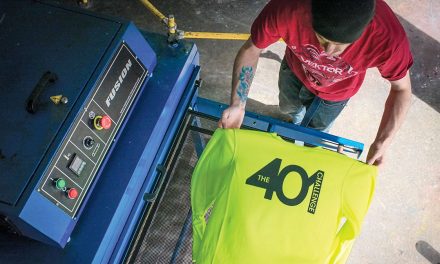 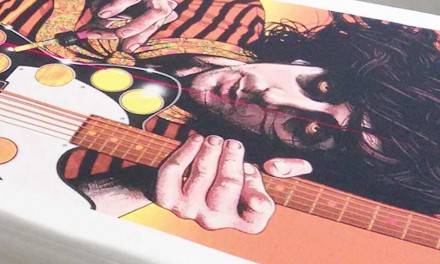