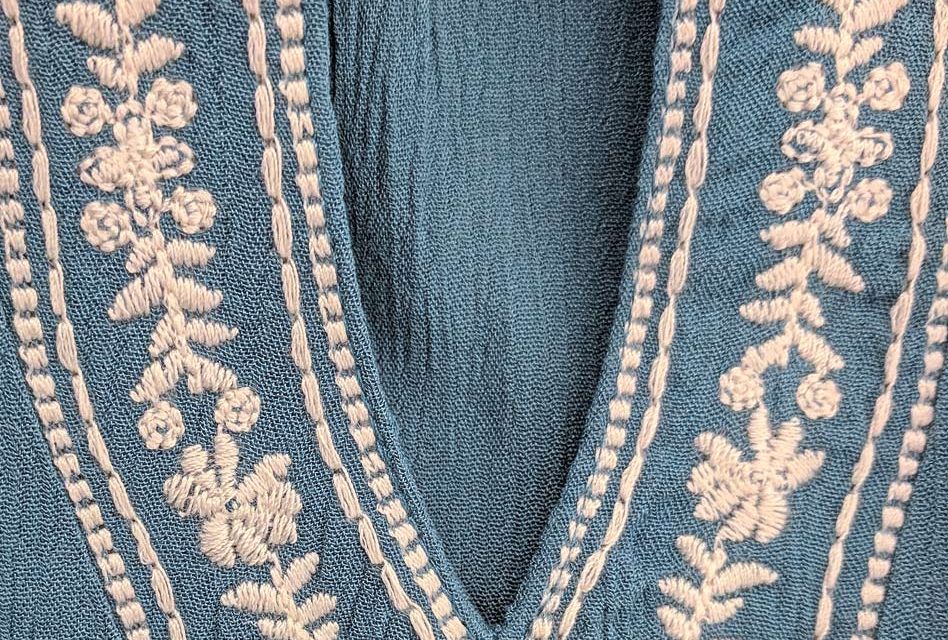 When a customer asks for a hand-worked look, whether it’s to reproduce vintage linens or to create a bohemian-chic, folk embroidery, ‘peasant blouse’ neckline, they often have the same qualities in mind. No matter the graphical content, these pieces almost always share characteristics that we can address through clever digitising and the use of some easily sourced, speciality threads. By briefly exploring these stylistic cues and discussing how you can create and tweak them for our own designs, you’ll be able to produce everything from reproduction handwork to folk-inspired looks that push beyond the classic style into new areas of expression.

Most customers are looking to emulate a rustic, simple execution. They tend to expect thick, individual stitches and, sometimes, a rough texture. To them, classic handwork is the woollen, twisted thread used in crewel, or the cotton floss and counted motifs like cross-stitch and the motif stitches of folk embroidery. 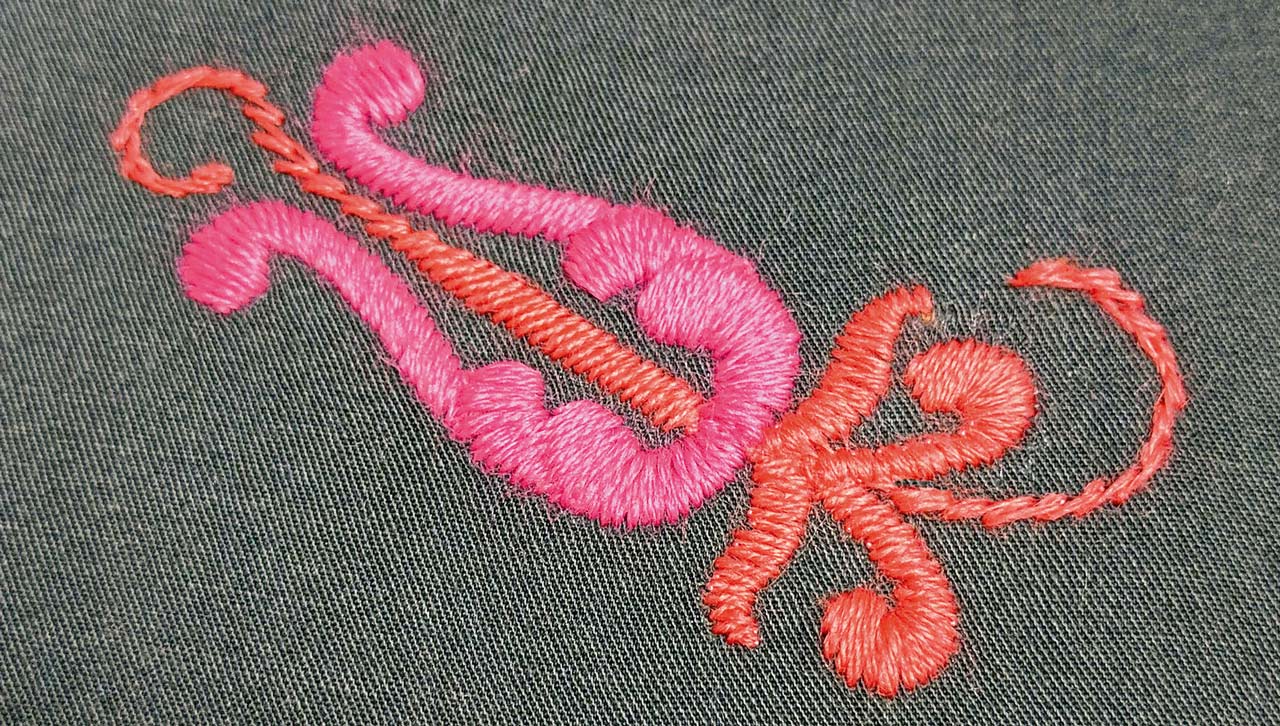 There are two simple ways to produce a stitch that looks ‘thicker’ than your average machine straight stitch.

First, with standard 40wt thread, you can repeat each individual stitch – often called ‘bean stitch’ when applied to straight stitching. Stitches are repeated in an odd number of passes so that they can progress in a single direction. One ‘bean’ commonly uses the same or very closely grouped penetration points at the beginning and ending of the group, with three, five, or seven ‘passes’ of thread, building up thickness with the multiple stitches.

Most software allows similar settings in satins, allowing you to determine the ‘satin count’, meaning that the straight pass of a satin stitch can be repeated much like a ‘bean’ stitch an odd number of times, while the angled pass is a single stitch connecting these thick stitch groupings. You will have to lower your density settings to make up for the added density of the multiple passes. A ‘single pass’ satin at 0.4mm density has the same stitch count as a ‘triple-pass’ satin set at 0.8mm density, but you’ll find that you get less coverage than with evenly spaced stitches. The edges are also rougher with these widely spread ‘passes’ of thread, but with the concept of handwork being less smooth and perfect-looking than machine work, the sparse coverage may actually be desirable. If not, you will have to use structural underlay and heavier densities to make up for the increased spacing; just be careful not to overly affect the hand of the garment by overdoing the density. 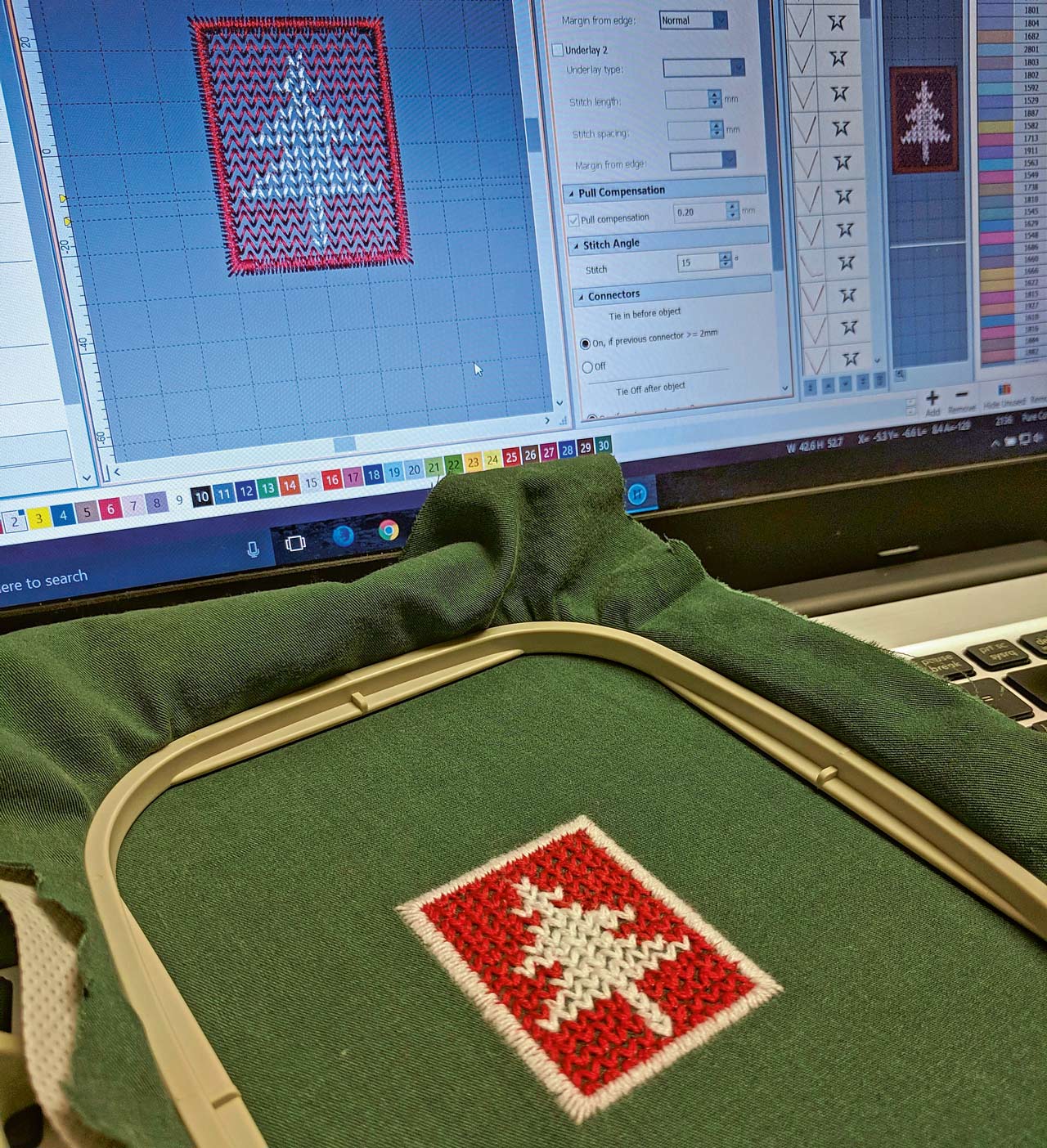 I used a thick cotton thread with a three-pass per stitch custom pattern to emulate the look of an intarsia knitted material with machine embroidery in this tree design. By copying the relative thickness and the length and direction of the visible yarns in a knit design, I was able to evoke that construction in my digitising. When digitising, the hard part of using thick threads and multi-pass techniques is that neither can be adequately shown in digital previews; this type of work takes testing and recording to pull off. One can see how the multi-pass digitising changes the look of the thread, as the border uses standard single-pass fills of the same thread used in the tree’s ‘yarn’ elements

The second method uses actual thick thread; there’s a multitude of embroidery-friendly threads thicker than standard 40wt, some with cotton or wool blends for the ‘vintage’ fuzzy finish customers expect. These do require thicker, large-eye needles, re-tensioning your machine to adjust for the much thicker thread, and digitising to accommodate the intense difference in thickness. For instance, manufacturers recommend a density of 9 points or 0.9mm for full coverage on 12wt thread, less than half standard density for full coverage on a 40wt. 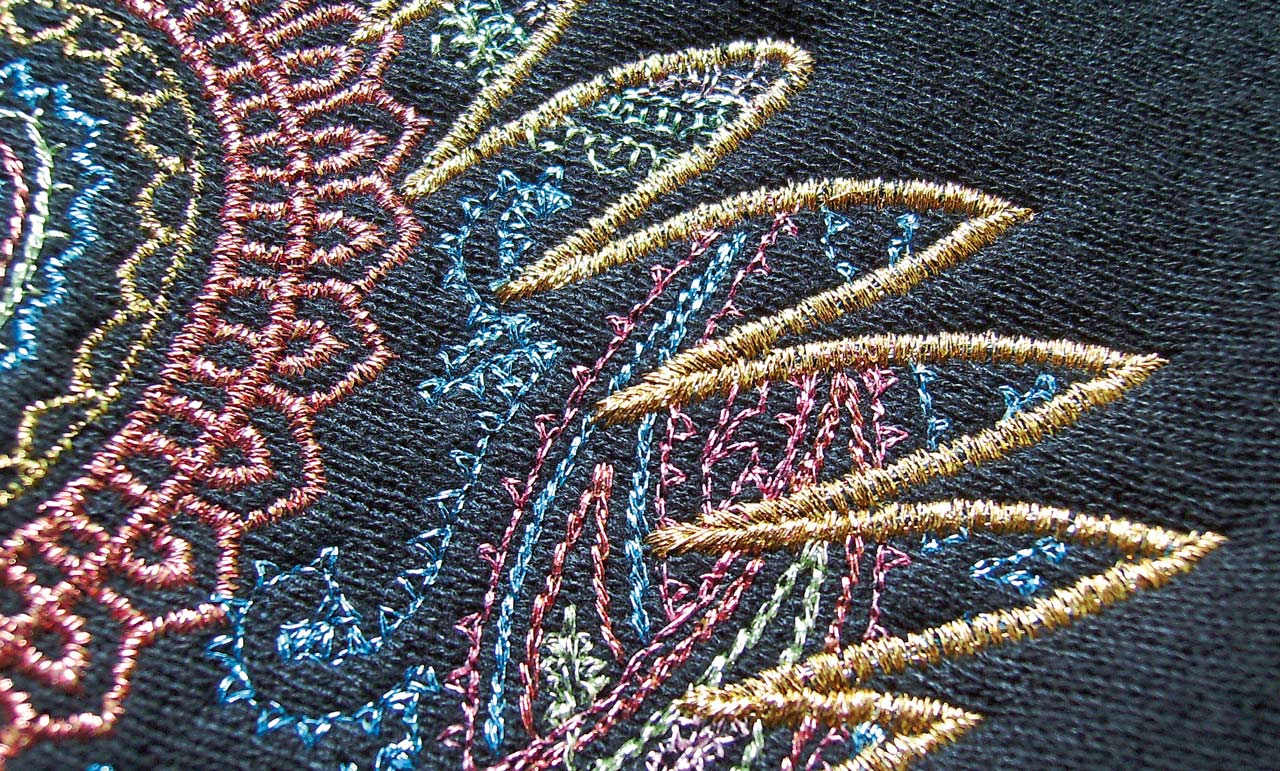 In this piece depicting a falcon silhouette filled with a colourful, traditional paisley pattern, I used all coloured metallics to create a very folk/bohemian look with a twist. On close inspection, you can see how I created motif versions of stitched edges from stem-stitch lines to achieve extra thickness without losing the sparkle of smaller, unaligned stitches, to patterns of blanket stitch, thorns and other repeated shapes that track the contours of the paisley patterns within. This piece evokes a folk aesthetic and handwork stitching while adding full-coverage machine satins and the shine of incredibly modern and inorganic coloured metallic threads.

Some customers’ demands are far simpler – they may just want to change their embroidery’s sheen to something without the shine of rayon or polyester; it can be tempting to run a rougher poly-blend or cotton thread used for sewing, but I have had mixed results with consistency. Luckily, we’ve seen the rise of 40wt matte finish polyester that runs like standard thread, has extreme resistance to laundering and abrasion, and even has unmatched colourfastness when exposed to UV light. Though not fuzzy in the way hand embroidery flosses are, they display uniform colour and a fl at appearance for a more subdued look than classic rayon or polyester. It’s a great compromise for those looking to give a hint of that hand-embroidered look without altering current design assets or adjusting your machines for thick threads, pairing well with the multi-pass stitch technique.

Another common customer request is for handwork stitches and motifs. Combining the methods for achieving thickness and texture with mock versions of common stitches is a sure way to capture a folk-embroidery feeling. You can ape even those stitch types impossible for machines to create by copying their most visible traits. Moreover, you can pre-programme these motifs for application to lines and filled shapes. Whether you are producing the varied back-stitch shapes of blackwork, the repeated ‘X’ of cross stitch, or even reproducing the surface of a knit fabric, the aim is the same: identify the critical elements that give the stitch its style; copy the angle, thickness, and placement of the stitches visible in the original and, if possible, create a motif that can be applied to digitised lines or fill an area to produce your folk embroidery style. 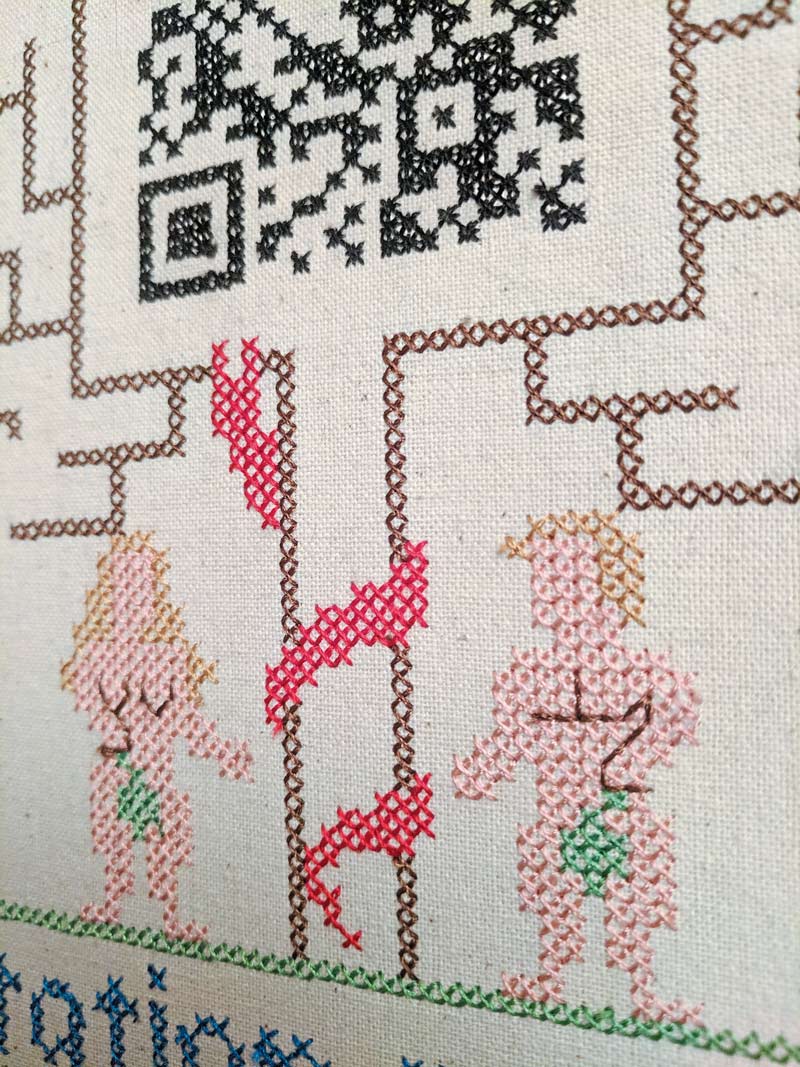 This detail from an art piece shows the juxtaposition of ‘Adam and Eve’ figures copied from an early American sampler with a cross-stitched QR code at top and centre. These figures are executed in standard thread, but the cross-stitch motifs were generated with a cross-stitch plotter built in to a digitising suite – this tool automatically plots the stitches to make sure each pass is even and each row properly placed. Tools like this make it easy to create a hand-worked look; this piece includes normal and double cross motifs, and only required minor manual work for the back-stitch elements outlining features on the people. If this were paired with the right thread, it could create a lovely reproduction of original cross-stitching with ease 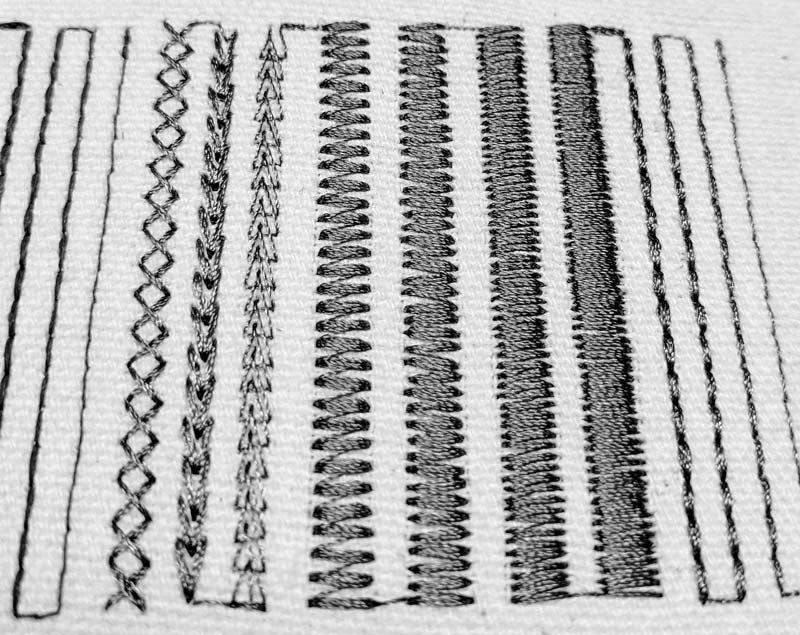 In this image, you see, from right to left, a test sample to establish how multi-pass embroidery differs from standard renditions. The far right straight stitch line has a single pass per stitch, the next to the left has three, then five, then seven passes per stitch. The satin stitches start at the right with a fully filled, single pass satin, then a three-pass satin, then five, then seven, with each column of stitches being made of the same number of stitches each time. Thereafter, you see some common motifs, with a single-pass continuous chain stitch followed by my own three-four pass split stitch, and lastly, a row of cross-stitch applied to a path

For instance, to copy a simple split-stitch, look to the most visible parts of the stitch: examining a sample, you’ll see loops that look most like a nested set of ‘V’ shapes – by creating the same kind of ‘V’ and, as previously discussed, stitching multiple passes over each leg and nesting each ‘V’ into the next, you can create an interlocked thick-lined stitch that looks very much like a split stitch, despite the impossibility of manipulating the thread the way a hand-stitcher would.

Whether you choose to go for full reproduction style and create classic folk designs with thick, natural fibre threads, apply the thick thread aesthetic to modern designs, or go all-out with machine-friendly threads and special effect fibres on traditional stitch motifs, the cues you take from the hand-embroidered look can help you to create designs that stand apart from the humdrum combination of standard density fills, satins and straight stitches that are the staple of everyday embroidery, elevating your work and pumping up its perceived value. 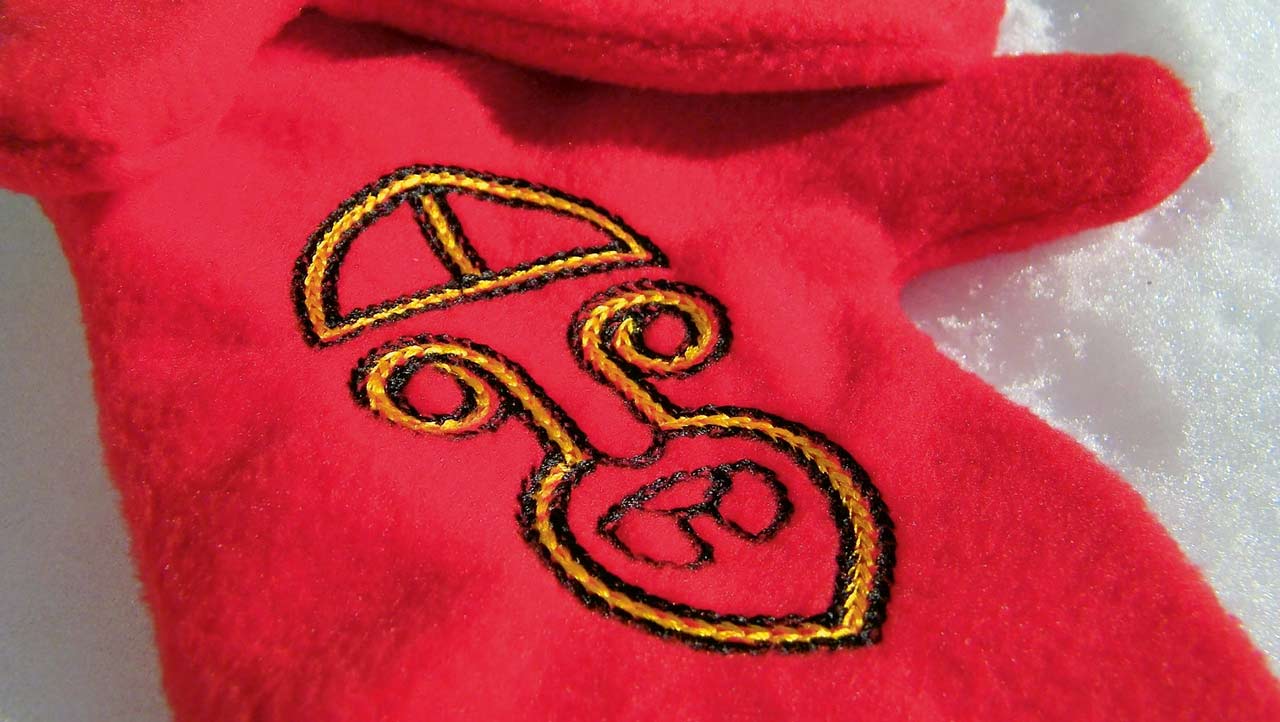 My split stitch is worked here in standard high-sheen thread to stand apart from the fuzzy texture of the fleece background on these mittens. The split/chain look I designed is reminiscent of classic manual machine and hand embroidery, and was applied to a simple line drawing after being programmed as a motif in my digitising software 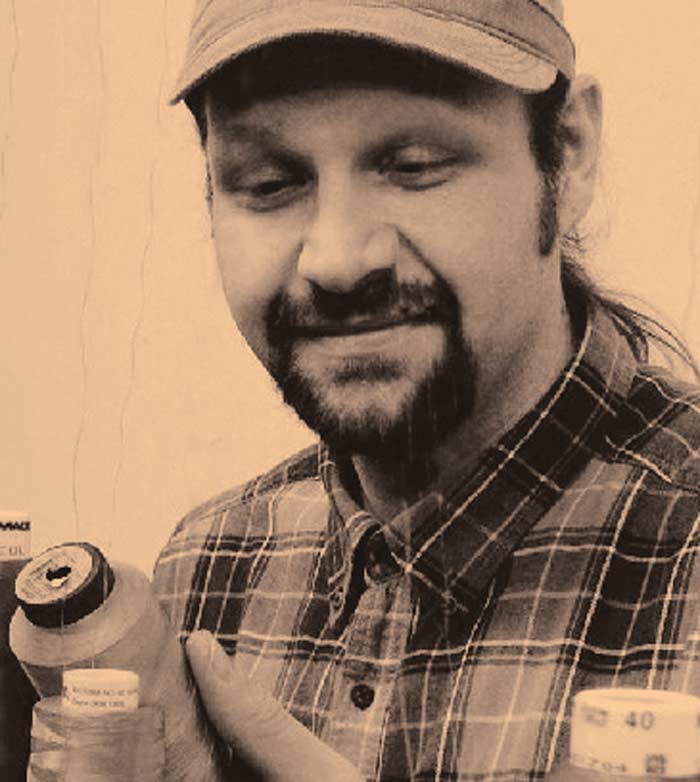 Erich Campbell is an award-winning digitiser, embroidery columnist and educator, with 18 years’ experience both in production and the management of e-commerce properties. He is the partner relationship manager for DecoNetwork in the USA.
www.erichcampbell.com 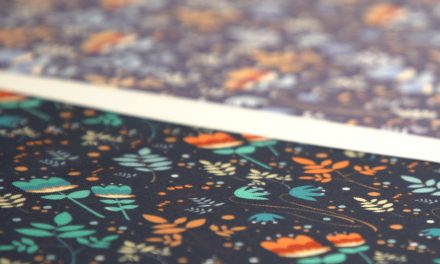 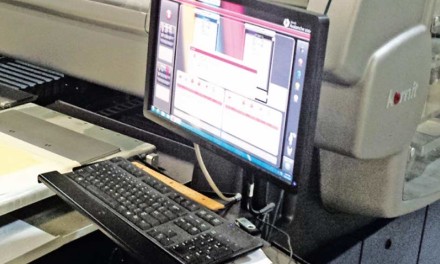 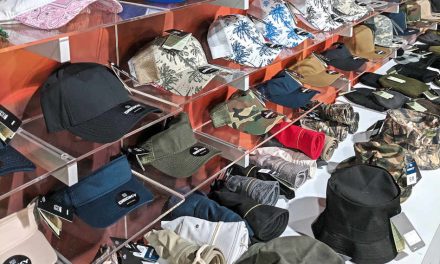 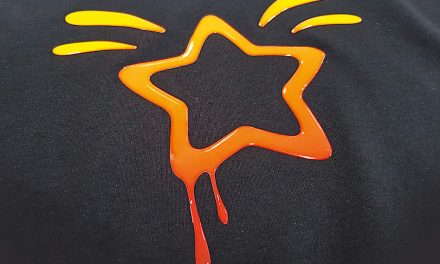